My former colleague at Reuters, Derek, has a brilliant blog that covers music, politics, the media and fatherhood (not necessarily in that order). Via his blog Jiffy Squid, I learned of this cringeworthy podcast from the SF Chronicle where editors have begun broadcasting annoying reader phone calls. What I'd like to know is what brand of coffee this guy drinks...I think I'm going to be hearing "drones!" in my sleep tonight.
Posted by Bernhard Warner at 7:25 PM No comments:

And the winner is...

This post is long overdue. Yep, it's the annual "Best of" for 2006. I was trying to squeeze this in just before I left for Sri Lanka, but had no time. Now I'm back I thought, can't let the Oscars people get all the attention with their silly list.

But first, a quick note. I am still trying to work out which categories are worth including year in, year out in this round-up. The categories selected here, I hope, are the kinds of things that perhaps one could file away in the "good to know" category. We're always concerned with service journalism here at ISB. Let me know what you think.

Best Meal (Italia): From Sicily to Alto Adige, it's hard to pick one regional cuisine over another. I did get around in 2006, and ate quite well. La Gazza Ladra in the wondrous city of Siracusa, with its heaping dishes of pasta Norma, is a revelation. Up North, skiing above the quasi Austrian town of Bressanone, I ate stinco on the bone. A meal fit for a king. But the honors for 2006 is Il Picciolo di Rame in the tiny midieval hamlet of Vestignano in Le Marche. There are only four tables, and scoring a reservation is no easy feat. But when you do, prepare yourself for a wondrous meal: usually 12 courses, each that carries a story. And at 30 euros a head (including wine), it's a rare bargain. A special mention has to go to the world's most flavorful tuber: the sacred tartufo bianco. The tagliatelle with white truffles in November took top prize in the home-prepared meal category. White truffle season cannot roll around soon enough!

Best meal (fuori Italia): They say something like one in four Americans considers himself "born again." I was dubious of such statistics. Until, that is, I ate at Arzak in the wondrous Basque city of San Sebastian. Somewhere between the caramelized apples drizzled with truffle oil, pomegranate and orange and the squid with apple compote , I had an out-of-body experience. My original review is here. Adam, my partner in crime that afternoon, wrote up a much more credible report here.

Best wine: But first a note on this category. I have a slight bias with wine. It has to be of good value, versatile enough to drink with a variety of meals without, crucially, overpowering your tastebuds before the main course. I also like the more obscure producers and have a preference for indigenous grapes with an interesting story behind them. Thus, you'll rarely hear me raving about a Sangiovese or Montepulciano. I'll happily drink them, but, at the enoteca, I look for something regional that I can share, hopefully, with somebody who's never tried, nor heard of, a particular varietal. Ok, ok, the wines already:

White: As you may recall, I went to a wine tasting course last year. At the end of each class we voted on our favorites. This 2004 Verdicchio dei Castelli di Jesi from the Colonnara vineyard blew the room away. Here's my original review. The good folks from Belisario also make a nice Verdicchio di Matelica.

Red: 2006 was the year I first was introduced to Lagrein, a magnificent red from the Trentino-Alto Adige region, a flavorful red, a bit earthy, peppery even. Perfect for hearty meat meals. It never disappoints. As a runner-up, we're going back to Le Marche for another curious, indigenous grape: Lacrima di Morro d'Alba. I met Piergiovanni Giusti at Sensofwine, the annual wine fair in Rome this November. At his vineyard in the hills outside Ancona, he's produced real stars with the Luigino, Rubbjano, and the eponymous Lacrima. I hope to pay him a visit this spring and report back more on this incredible grape.

Beach: The little Greek island of Sifnos has everything. Fantastic beaches, quaint sea villages, all white-washed in sugar-coated splendor. Swimming in the Aegean is a sublime experience, a far cry from my youth swimming in the rough surf of the Jersey Shore. The beaches are rocky and the water is crystal clear. And, Greek grandmothers do swan dives (pictured) from overhead. The favorite beach was Chrysopigi, where you could see other islands in the Cyclades floating in the distance. And, for lunch, a fantastic fish meal on the beach nearby. Che bella! 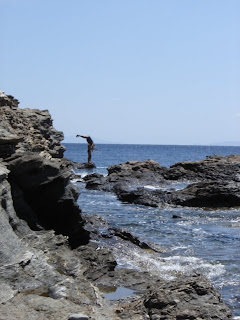 Film: Here's my review of the best Italian films of 2006. NuovoMondo gets this year's top nod.

Gelato: For the second straight year, it's Gelateria Alla Scala in Trastevere. His cinnamon (la cannella) is a world beater, certainly good enough to quiet the Romans, who insist their gelateria is the best in town. Pffft.

Have I left anything out?
Posted by Bernhard Warner at 12:39 PM No comments: 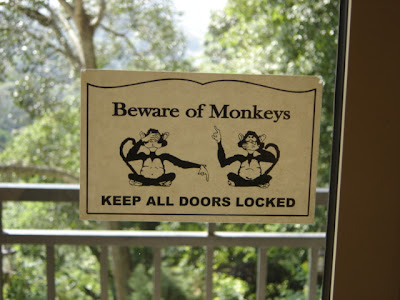 I've stayed in a lot of strange hotels, but this one in Kandy tops them all. Perched on a hill above the lake, the hotel grounds are teeming with monkeys. If you leave the door open even a crack, they'll trash your hotel room, rock star style! I just wanted to avoid them hitting the mini bar.

Posted by Bernhard Warner at 7:05 PM No comments: 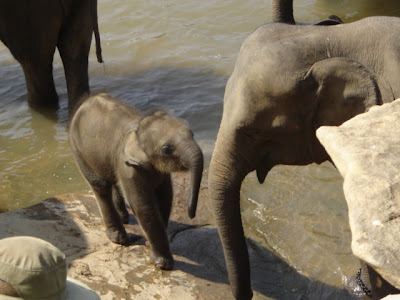 One morning we managed to get out to the Pinnewala Elephant Orphanage. I know it's really cliche, but baby elephants are too damn cute for words.
Posted by Bernhard Warner at 7:01 PM No comments: 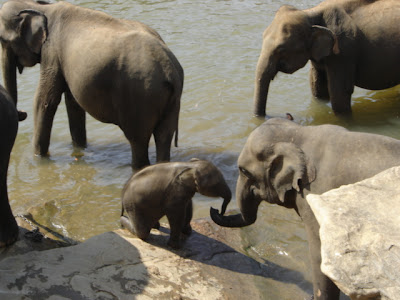 Posted by Bernhard Warner at 6:59 PM No comments: 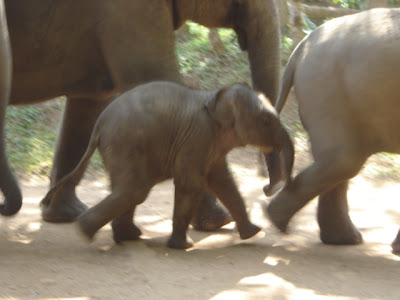 Tutti a scuola! Everybody, off to school!

Posted by Bernhard Warner at 6:58 PM No comments: 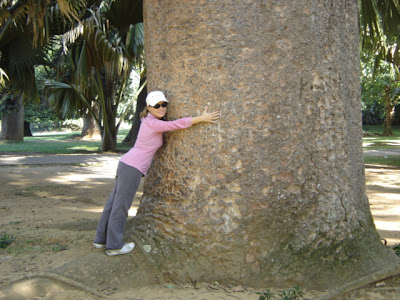 As Xtina pointed out immediately after the picture was snapped, you could vacation in this tree

Posted by Bernhard Warner at 6:57 PM No comments: 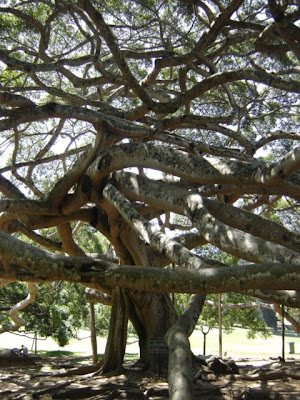 This is the view from under the sprawling canopy of the Giant Java Willow Tree. The canopy stretched across a field, spanning 2,500 square meters

Posted by Bernhard Warner at 6:55 PM No comments: 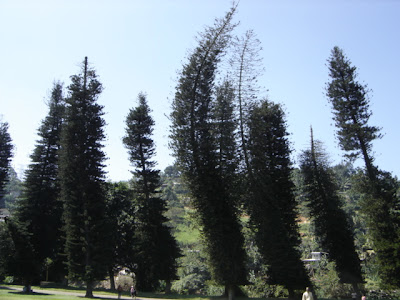 These trees must be the inspiration for Dr. Seuss

Posted by Bernhard Warner at 6:54 PM No comments: 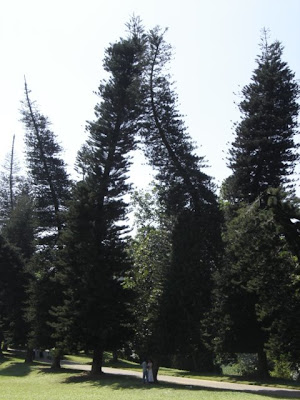 Spot the lovers canoodling under the trees

Posted by Bernhard Warner at 6:53 PM No comments: 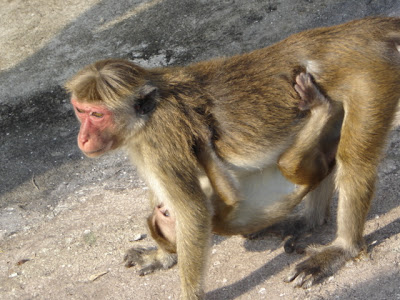 It's truly a site to see monkeys in action. They are so damn mischievous -- nicking anything they can get their hands on, making a racket and always playing and eating. But they also show their fellow monkeys an incredible amount of affection. Here's a little guy being carried along by, presumably, an older family member.

Posted by Bernhard Warner at 6:51 PM No comments:

A little hope in the jungle

Il Sette Bello is back. Where were we? The wondrous island idyll of Sri Lanka. As I mentioned in a previous post, we went to the tsunami-decimated area along the southern coast to pay a visit to a pre-school that our friends here in Rome funded a year ago. Our mission was to see where we could help out, and check on the progress of recent construction.

The first glance was a bit daunting. There was a gaping hole in the outer wall of the second-floor classroom (since patched), the bathrooms were little more than cement out-houses, senza plumbing, and the third floor lacked a roof. But all was forgotten for a few minutes on the morning of Jan. 8 when 65 hip-high three- and four-year-olds registered for their first day of pre-school. We were greeted with a bouquet of tropical flowers and giant smiles. So giant you'd think these little tykes would topple over, mid-grin. 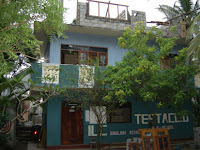 At an opening ceremony, the kind-hearted monk, Anomasara Thero, introduced us to the parents and children in Sinhala. The older students (age 4) then sang for us an old favorite, their ABCs.

Their little routine (pictured) was paralyzingly cute. Yours truly stumbled through a brief speech that nobody understood. I told them there's a lot of people, half a world away, determined to see this generation grow up in a more hopeful world. Their beaming smiles convinced me we'll all be okay.

Afterwards, we talked to the teachers and monk, trying to assess what the community needs to keep the school running. The answer? A lot. Well, a lot for the locals. Not much for us here in the West. (I'll get to that in a minute.) All the kids come from extremely poor families. They are the sons and daughters of fishermen, seamstresses, or, if they're lucky, tuk-tuk taxi drivers. The literacy rate is terribly low, and their economic prospects are bleak. Without a grasp of English, many of them will have few job opportunities, and little hope of crawling out of poverty. This is the sad truth. That's why the school is so important. It lends a big hand to some very little souls.

We've determined that roughly 15 euros ($20 or £10), will equip one student per term with the materials and uniform needed to attend class. When I say "equip" I mean everything. The school provides for the students their shoes, socks, shorts and shirts, books, pens, etc. If we didn't, they'd simply go without. That's how much difference a small donation would make. More ambitiously, we'd like to finish the bathroom (running water would be nice) and maybe purchase a copy machine and basic music instruments for these tykes.

Please give the site a look, and let us know if you might be able to help them out. We'd be grateful. And so would they.

(More photos to follow)
Posted by Bernhard Warner at 6:20 PM No comments: 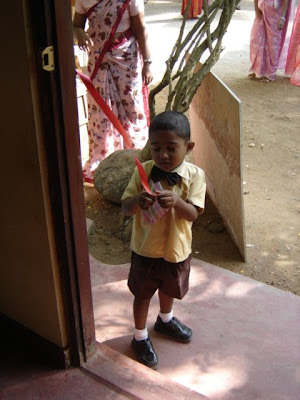 Posted by Bernhard Warner at 6:18 PM No comments: 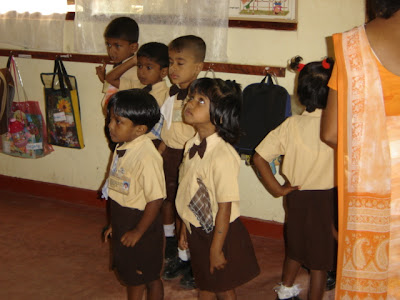 Posted by Bernhard Warner at 6:17 PM No comments: 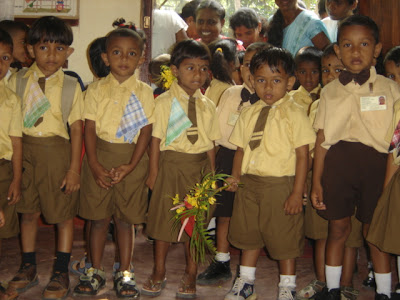 Posted by Bernhard Warner at 6:13 PM No comments: