Five years ago this month I picked up a woman at a train station. The Ancona train station. It was a Friday night. Kinda foggy. She'd never seen me before. I'd never seen her either. But we sorta felt as if we'd known each other our whole lives. (A month of email courting and long distance phone calls will do that, I reckon). She was expecting me. I was late, too late to pick up flowers or even memorize some nice words to say in Italian without screwing up the syntax.

I broke the ice with a question: "hai fame?" Hungry?

Yep, she nodded, and I drove us off into the gloom in search of a trattoria (whose name I still can't recall) maybe a hundred yards from the port. They serve brodetto all'anconetana, a famously rich soup of all the goodness that the fishermen can round up each day in the Adriatic. I'd eaten there once before and I couldn't stop smiling for days afterward. I figured the brodetto would calm our nerves. It did. She approved, and of me too.

I don't want to think it was the brodetto that brought Xtina and me together. But it certainly smoothed the awkward culture clash. Whenever I sit down to brodetto marchigiano I think of that meal. And smile.

Why am I thinking of this now? Because The New Yorker's Mimi Sheraton in the recent food issue goes in search of il brodetto migliore, and of course she settles in Le Marche. Abruzzo too (which for some crazy reason the line-editors allow to call Abruzzi, which hasn't formally existed since the Kennedy Administration. Whatever. Who cares.) A worthy dish gets a nice write up. Smiles all around.

*btw, one of Xtina's more famous lines is "always the same soup" to describe anything that quickly becomes habit. Never brodetto of course.
Posted by Bernhard Warner at 11:09 PM No comments:

This little ditty is from the gang at The Big Money, with Jim Ledbetter on vocals.
Posted by Bernhard Warner at 12:57 PM No comments: 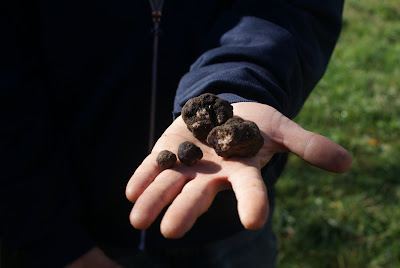 ... truffles, white truffles to be exact (aka Tuber Magnatum Pico). Those pictured above (that's Stefano's hand) are black truffles, not quite as good, but still pretty damn tasty.

It may not feel like it here in balmy Italy, but we are in the middle of white truffles season, the perfect excuse every October and November to go foraging through the woods in search of this ridiculously expensive tuber. But worth every penny! Last year, we went with Alberto and Marcelo, two local tartufaii, in the woods below my house in Amandola. Yep, Amandola is one of the few places on earth where these blessed organisms grow. I wrote about it for The Guardian. The story is out today. You can read it here.

Posted by Bernhard Warner at 2:57 PM No comments: