Here at Il Sette Bello we get the occasional piece of reader mail that we endeavor to answer as promptly and comprehensively as possible. This means every 18 months or so. You can send your mail to ISB's editorial offices in Rome. With Poste Italiana, it should arrive in by December when we will put off running our next installment.
Eccola, la posta:

Dear Sir,
In the U.S., the 4th of July is a major holiday when the Americans celebrate Indepedence Day. I'm thinking of taking off both Friday and Monday, but I've already used up my vacation days for the year. Any advice on how I can duck out without the boss knowing?
-- G. W. Bush, Washington D.C.

Dear Mr. Bush,
In Italy, a Friday holiday is an excuse to invoke the "ponte," or "bridge". This means if the holiday falls on a Friday you take off Monday too as there could be traffic on Sunday night. Plus, you need a day of rest after three days away from work. Oh, and no respectable worker shows up at work until 11 a.m. on the following Tuesday. Getting out early on Thursday is also permissable... Confused?

Dottore,
Is Italy ready for some Wham-Bam-Thankyou-Maam!-Change, the kind American voters are going to open up on the Republican Party this November?
- M. Obama, Chicago

Dear Ms. Obama,
Italy is on its 63rd government in as many years. Voters here detest change. That's why they vote in the same band of criminals every 10 months.

Professore,
I'm in my 70s and am considering a position as the next leader of the free world. The problem is people see me as, you know, old. How does Italy, a G8 nation, manage to keep the same band of crooked old guys in power running the country for so long?
- J. McCain, Phoenix, Az

Dear Sir,
My family and I run America's largest beer brewery, one that is particularly beloved by America's future: college kids. The problem is everybody else seems to think our beer is pretty undrinkable, except the Belgians who now want to buy us. Can a Belgian with a thirst for Budweiser be trusted?
- A. Busch IV, St. Louis, Mo.

Dear A. Busch IV,
It's true. Your beer is pretty undrinkable. Our advice: sell it to the Belgians who have a terrible track record doing anything constructive other than making very drinkable beers. Also, if you have any pull, please have the Coors family sell out too.
Posted by Bernhard Warner at 11:47 PM 3 comments:

Triple-digit temps is not helping the mood of most Italians today who watched in anguish as The Azzurri crashed out of the Euro 2008 tourney last night with an anemic 4-2 penalty shootout loss to Spain, the first loss to Spain in 88 years.

Tension was high when the two sides went into the penalty round. Here's how the drama played out from our perch at Piazza del' Gazometro last night.

Portrait of the artist as a young man

That, of course, would be Michael.

Through the 29th of June he has an exhibition in Perugia at the former Chiesa di Santa Maria della Misericordia on Via Oberdan in the centro storico. We were there on Sunday for the grand opening where Michael was feted by Perugia's unstoppable art critic Massimo Duranti... I shot this video before the crowds arrived with my N95 phone.


Italy goes up 1-nil on Pirlo's penalty. Shot on my N95 huddled in the rain this evening at Piazza del Gazometro, a nice little event thrown by Partito Democratico. A rare win for il PD.

It was a pretty lacklustre match. No head-butts. No scandalized national heroes. But Italia lives another day.
Posted by Bernhard Warner at 11:32 PM No comments:

So says the Vatican, which will not permit Ron Howard and his crew to film the impossible adventures of symbolist extraordinaire Robert Langdon for the upcoming "Da Vinci Code" prequel "Angels and Demons" on its property here in Rome, The Times reports.

Father Marco Fibbi, a spokesman for the Diocese of Rome, told The Times: “Normally we read the script but this time it was not necessary. The name Dan Brown was enough.”
Apparently, Don Fibbi's not a fan. 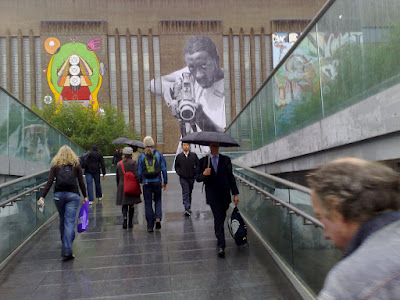 The Tate Modern is having an exhibition on street art with massive wall murals outside. This one captures a bit of the flavor inside (tho I didn't get in.) Yes, I'm in London for our Social Media Influence Conference. Come by!
Posted by Bernhard Warner at 9:12 AM 1 comment:

The other night after dinner Lara proudly presented us with her son Davide's first (of many) love letters. Davide, whom I mention from time to time here, is 5-and-a-half. He and I build drippy sand castles together at the beach. He knows my Italian is not so sharp and so it's usually me who builds the sand castles while he barks out instructions and keeps an eye out for anyone in a bikini who might stomp on it. After a few bikinis walk well past he usually stomps on it himself.

That's Davide. He's a typical boy. He loves his plastic monsters, The Gormiti, his Power Rangers and gelato with panna. He is mad for DVDs like Monsters Inc. and Wallace & Gromit (sub-titles don't matter to him) and race cars. Now he's old enough to get love letters. Or una lettera d'amore.

I have to admit, before I'd even seen the letter, I was a bit dismissive. Sappy love letters are for girls. And love letters written by small children with shaky penmanship and poor grammar is the stuff only a mom could swoon over. So when Lara handed it to me, already safely sealed in a protective laminate, I wasn't expecting much.

How wrong I was. Our deconstruction of the letter went on at least a half-hour, and could have gone even further, but everyone at the table shut me up. This love letter was a piece of genius, twisted, sappy genius. Call it Shakespeare meets Wes Anderson.

Davide's admirer is six, a full six months older than Davide. The maturity shows. Let's call her C. (It's only fair.)

With your typical love letter, of course, the formula rarely changes. You get a single narrative line, particularly with those who've mastered only the present tense and cannot go more than three words before mistakes pile up on the tracks and those unsightly scribble corrections start to mar the narrative flow. Between the blotches there is the address to the object of the desire ('Dear so-and-so' or 'My dearest so-and-so'); feelings are communicated ('When I see you I feel...'); wishes and hopes are expressed ('I want us to live together forever...') And, an x-filled salutation seals the compact.

C ripped up the old formula and started at work on an incredibly detailed plea that was dripping with symbolism. Firstly, she took the sheet of paper and turned it landscape-wise and divided the sheet into separate message boxes for the full effect. In one of the message boxes she wrote (and I am translating here)

Dear Davide,
I want us to have three, or six!, small children. I love you. C

C repeated the "ti amo" elsewhere, which is a sweet touch because Italians usually use the less specific term of endearment "ti voglio bene" ('I want you well'). Don't get me started on "ti voglio bene". It could be the least romantic line in any of the Romance languages! When I hear it I cannot help but feel the recipient is being cheated, like the speaker is considering his or her options. The proper response to "I want you well" should be, "You damn well better!" which translates roughly to "lo dovresti!"... In any case, C doesn't fall for the banal trap that her Roman classmates might. Nah, she poured out her heart using the most literal, unambiguous term of endearment there is. You go, ragazzina!

The rest wasn't so clear. C took a piece of wool material and sewed a pocket, which she glued to the lower right hand corner. Inside the pocket she placed, naturally, a single die and a plastic Spiderman wristwatch. The die, Stefano believes, symbolizes that her feelings for Davide is a game of chance. A roll of the dice. Yep, pretty much sums it up. The Spiderman watch could be a reference to "forever" or to the promise "I'll be waiting for you to turn 6 like me". To Davide, it meant Spiderman! In fact, Davide went right for the wristwatch when the letter was presented to him after school. He didn't bother with much else, which had us all feeling the poor girl has cruelly learned far too quickly in life that Roman men are more interested in fancy wristwatches than expressions of "ti amo". We all sighed in unison.

We're not finished with the letter though. The capper, for me anyhow, was the paper itself. The letter was written on the back side of a page that had been snared from an instruction manual. On the flip side was a photocopied page -- Chapter 23 of an instruction guide to Lotus Notes, it read.

The symbolism? We had no explanation.
Posted by Bernhard Warner at 10:10 PM 2 comments: