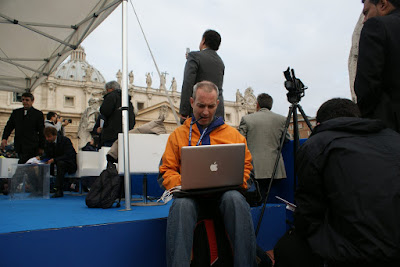 Posted by Bernhard Warner at 10:57 AM No comments:

A weekend in piazza: the Beatification of JP2

This is a bit late in posting, but it's still worth it. A few weeks ago me and a young documentary filmmaker from Rome, Luca Paradiso, spent the better part of a weekend camped out in Piazza San Pietro to film the Beatification of John Paul II, a story told through the eyes of the weary pilgrims and faithful who made the journey from all over the world. We had a lot of fun doing it for one of my clients, Opera Romana Pellegrinaggi.

Here is their story:

Posted by Bernhard Warner at 10:51 AM No comments: