Where Romans go for coffee 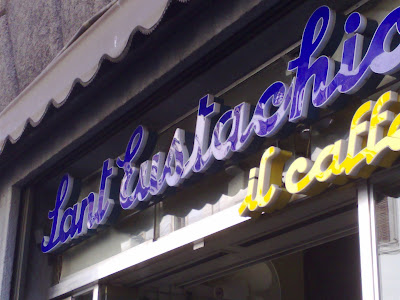 Sure, the Pantheon is pretty impressive. But if you see determined Romans stream past around the back, paying little attention to the place, it's probably because they are on their way to Caffe' Sant'Eustachio for un caffe' vero. The constant queues are testament that this could be the best coffee in the world.

William Grimes back in 2002 wrote in The New York Times about the place:

When the need for a real espresso becomes overpowering, buy a ticket to Rome, tell the taxi driver to head straight for the Sant'Eustachio cafe. The espresso will be perfect. A little expensive, but surely worth the trouble.

For the pastry chefs among you, check out this informative video about making tiramisu, with Sant'Eustachio coffee of course.
Posted by Bernhard Warner at 9:41 PM No comments:

Don't mess with a man in tri-colore wig 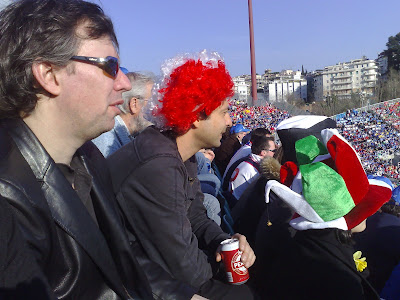 The Azzurri this year are having a rough 6 Nations tournament. There was much hope for the future of Italian rugby after a few promising victories against the French and the Welsh in years past, but this year, nah, not so fast. The Italians cannot seem to put a full 80 minutes together and they don't seem to have a try in them as the tournament wears on.

Still, the Italians are proud of their club. And, as the Azzurri took the lead against the mighty Welsh in the second half and battled to the 71-min mark with a 15-13 lead, you cannot blame the home team fans from getting a little carried away. Stefano, sitting next to me (pictured above, proudly displaying the national colors of Peroni red; Matt of Gastrokid fame is next to him, Matt's lovely wife, Jowa, just out of the picture) at Stadio Flaminio yesterday, started heckling a bemused Welsh supporter late in the second half as the poor guy left his seat, for a beer no doubt.

As the guy walked past, Stefano yelled at him:
Go home, friend! You are cooked! Boiled!

Surprised, he looked up at us. Speechless. Go home!, Stefano yelled again. The Welsh fan turned and walked off, to cheers from the nervous Italians and the good-natured Welsh sitting all around us.

A few minutes later the Welsh stormed down the field and scored. The Welsh never looked back.
Posted by Bernhard Warner at 9:13 PM No comments:

A photo tour of Garbatella 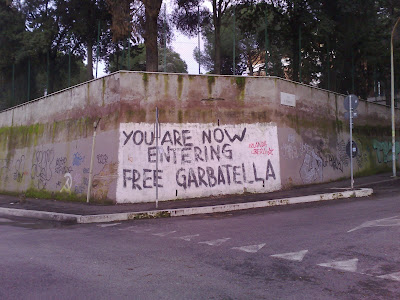 I mentioned below it's such a spectacularly sunny day today here in Rome. Walking back from buying the newspapers I snapped a few photos with my N95. (There are also some old shots too). 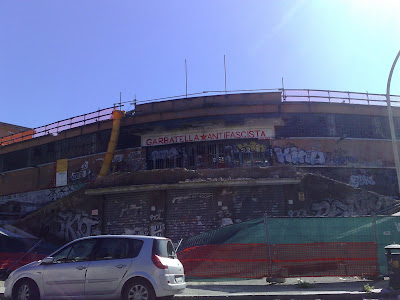 First stop: the market. It's been under construction, the sign reads, since 2004. There hasn't been any progress on the structure since we moved in 18 months ago. But today, I see, there's a fresh coat of paint, declaring Fascism is still off-limits. The old lefty spirit of the 'hood is kind of quaint these days. Today the Left in this country is becoming more fragmented and irrelevant every day, sad when you consider the alternative, Berlusconi and his lot, have zero credibility outside of Italy. Garbatella reflects the decline of The Left. The PD (Partito Democratico) HQ closed up shop a few weeks ago. Still, you can see colourful mural homages to Che and Castro and even Bobby Sands just a few steps from this delapidated market. Perhaps there's a metaphor in there. Not sure. 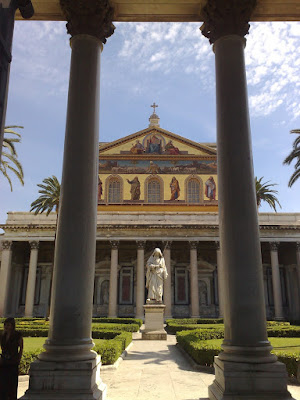 Walking downhill now you come to the Basilica of Saint Paul's, Rome's other basilica. Most pilgrims head to St. Peter's across town while St. Paul's sits quietly on a flat patch of grass between the river and the hills that lead into Garbatella. It's really impressive inside, particularly the cloister where relics of the early Christians abound.

We get nice sunsets from time to time too. 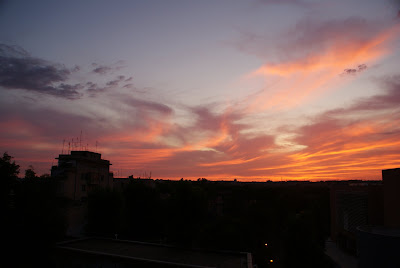 Posted by Bernhard Warner at 4:55 PM No comments: 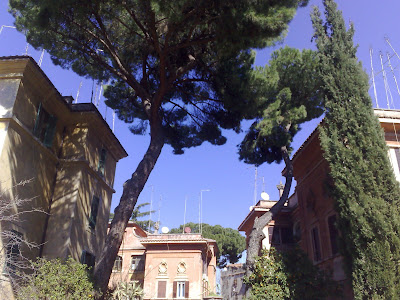 I took a stroll around the neighbourhood today. It's one of those glorious early spring days here in Rome. The light is incredible. I tried to make out which ones seem fit enough, and which ones must go. They all seem fit to me. I want them all to stay! I'm having a Lorax moment. I'm sure I'm not alone.
Posted by Bernhard Warner at 1:11 PM No comments: