The Mamertine Prison, the Leavenworth of Ancient Rome 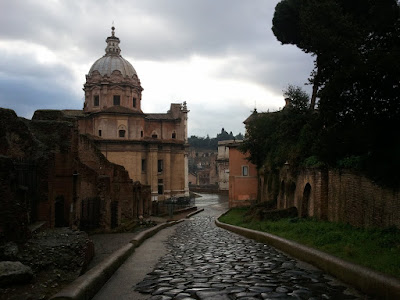 This year, I'd like to get back to blogging. Here. I've been a bit time-stretched with the launch last year of SMI and, more recently, Jospers. But I hope this year to get some time to blog about life in Italy more. A few of you have long given up on me. I'm hoping to win you back… with stories like this one.

First some background: On Thursday I co-organized a private tour of the Carcere Mamertino (or, Mamertine Prison) just beside (and under) the Roman Forum for select bloggers and Rome-based journalists. It was on behalf of a fascinating new client, Opera Romana Pellegrinaggi, part of the Vatican. ORP has one-of-a-kind access to many of the most important historic and cultural sites in and around Rome including guided tours of the Sistine Chapel at night, the Vatican Gardens, a Vatican Library exhibition, and the Carcere. (They also organize pilgrimages to the Holy Land, Lourdes, Santiago de Compostela, etc.) ORP works closely with some of Rome's most important historians and archaeologists on the preservation and upkeep of these sites. On Thursday, they arranged to have Patrizia Fortini, an archaeologist who was part of the excavation team for works on the jail a year ago and in 2000, give us a guided tour. A bit on the excavation that wound up last year: it was crucial work as it lent more evidence to a story that's been circulating around this city since Emperor Constantine's day - that saints Peter and Paul were both imprisoned here prior to their execution. It's a legend that gives this sacred place extra importance to Christians looking for insight into those turbulent early days of the Church. The conclusion: there is still no 100% proof Peter and Paul were incarcerated here, but it's very, very likely they were. 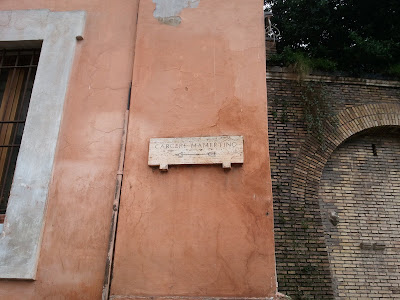 Fortini explained to us that the Carcere had a dark and bloody past, also a sacred and spiritual one. First, the bloody part. As Rome grew into an conquering force it needed a proper maximum security prison to house its vanquished foes. The city fathers turned to what had been a pagan shrine, establishing it as the maximum security prison of the ancient world in the centuries before the birth of Christ. Here they imprisoned reviled enemies of the Kingdom/Republic. Why here? Location. Victorious armies could parade enemy combatants through the Foro Romano (cue cheering, baying throngs) and straight into the Carcere where they were executed (usually by public strangulation or stoning or something equally brutal) fairly soon after.

To the early Romans, the Carcere was well known as a place not to be messed with, even before it became the Leavenworth of ancient Rome. It was known that a spring ran under the jail. To the deeply superstitious pagan people the subterranean waters were believed to be a conduit to the netherworld (Fortini says they looked for this underground river, but there's nothing). Killing someone here, the ancient belief went, would send them straight to Hell. The Romans trotted out this story as if it were fact that this jail was literally the gateway to Hell. Anyone who entered here never returned, but instead met an end of eternal damnation. Imagine then the state of mind of Peter and Paul upon entering this place, chained, beaten and condemned to eventual death. They had stronger convictions, as did their determined, early Christian followers. This of course made Peter and Paul even more dangerous to the State. Executing them here, the thinking may have gone, would silence these early Christians. This is an important point. Peter and Paul were indeed enemies of the State. Following the tradition of the day, they would have most certainly been imprisoned here in the baddest of all jails of the ancient world.

Among the other things Fortini told us was the discovery of remains of three cadavers - a man (at about 180 cm tall, a very large one for this era), a woman and a 10-year-old child - during the most recent excavation. The fascinating detail came from radio carbon dating determined they were from the 8th Century BC, which gives us a bit further detail on just how old this place is. The official history is that the jail construction started at in the 6th Century BC, but this discovery would show that the foundations go back much further and that it served some major function for the city well before it became known as a prison.

A tour of the jail (it's open to the public) is really one of those uniquely Roman experiences. It's rich in history and spirituality. Archaeologists have succeeded in piecing together vital bits that spell out just what kind of deadly consequences the founders of the Church would have been facing as they sought to build their flock. It's something to put on your itinerary if you are interested in early Church history and the life (and death) of the Church's founding patriarchs.

If you are coming to Rome and want to book a tour, you can reserve tickets here. In the off-season, it's possible to do a tour without booking ahead. Still, it's advisable to reserve a place.

Where is the Mamertine Prison: located near the Arch of Septimius Severus in the Roman Forum. It is literally under San Giuseppe dei Falegnami Church, just off the via dei Fori Imperiali.

For another review, check out Arlene Gibbs' reportage on Nile Guide: Rome.
Posted by Bernhard Warner at 2:31 PM No comments: