According to NYT, about 13 percent of American men between the age of 30 and 55 -- the so-called "engine" of the American economic machine -- are out of work. This is up from 5 percent a generation ago. More shocking still, for many of these able-bodied men, they are choosing to remain unemployed rather than work in a demeaning, under-paying job.

How is this possible, in a land that we were taught values the work ethic and supports only those who punch a clock every day? Turns out, the US has a surprisingly efficient public welfare system, the Times reports, in the form of disability insurance paid for by Social Security.

But let's put the U.S.'s newfound freeloading ways on a global perspective. The number of out-of-work (to an economist, there's a giant distinction between "unemployed" and "no longer looking") American men in this age bracket is rapidly closing in on those layabout Europeans. Yep, it's 13 percent for the Yanks. 14 percent for the let's-take-August-off Europeans.

I'll ponder this while I'm on holiday next week.
Posted by Bernhard Warner at 10:02 PM No comments:

Cappuccino after 10 a.m.? It's illegal and immoral

Beppe Severgnini, a correspondent for Corriere della Sera and author, was on The Today Show this week. In his few minutes, he had some shocking things to say about the real Italia, including red lights don't necessarily mean stop!, dinners are not seen as a break between getting home from work or school and watching TV, and every town square is the equivalent of the American shopping mall. And yes, never never never is it acceptable to order a cappuccino after 10 in the morning. Here's a link to his clip.
Posted by Bernhard Warner at 4:15 PM No comments:

During my years at Reuters, I filed a grand total of one story from Le Marche. It was about the gadgetry and high-techetry employed by police for crowd control purposes. I believe the hook was Dubya's November 2003 visit to the UK, a stopover that triggered massive protests and demonstrations. (How times have changed. eh?) I wrote and filed the article from one of the most incongruous places: a municipal library in Sarnano. As I recall, a few dozen hip-high Sarnenesi 6-year-olds were making a hell of a racket in the other room as I typed. Sadly, I couldn't convince the desk to slap a Sarnano dateline on the article. But this time, the eds couldn't wipe out any references to Le Marche.

My latest columnfor The Times is about HSDPA, written in my neighbor's back garden in the middle of nowhere. For those of you wondering just what is HSDPA, it's an incredible wireless broadband technology that I've been lucky enough to demo. It's been a life-saver for me the past few weeks as I work remotely. I'm going to rue the day I have to hand in the kit and head back to the library to file.
Posted by Bernhard Warner at 3:50 PM No comments:

A smile to light up the room 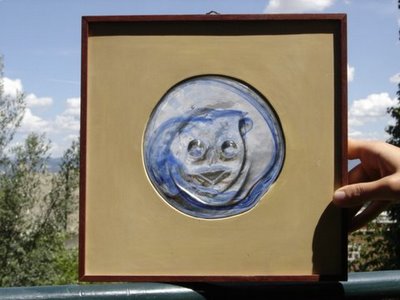 This weekend, Xtina, her father and I went to visit Giuseppe Agozzino, a delightful old illustrator/artist whose cramped, one-window studio lies below Perugia's main square. Centuries ago, the studio was a temporary cell of sorts -- the very place where church officials would lock up the cardinals to vote on the next pope. According to Agozzino, five popes were selected in conclaves held in these narrow dwellings.

Today, the barren room is locally famous for its 80-something-year-old tenant, Agozzino. A tireless promoter of all things Umbrian, Agozzino now spends his day illustrating, philosophizing and sharing incredible tales of his travels and past encounters with some of the art world greats. Upon leaving, Agozzino presented us with this. I'm keeping the artist's name a secret for now. But suffice to say, we are thrilled with our new smiley face.

Posted by Bernhard Warner at 7:01 PM No comments: