As you know, I haven't posted here in ages. So, here's a quickie to tide you over. 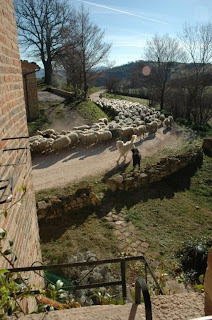 I'm nicking this from Michael's blog. It's a photo from late February of morning traffic on the dirt road between our houses. Here's the full story.

I'm so glad I don't have to commute any more.
Posted by Bernhard Warner at 12:03 AM No comments:

Here's one to ponder: If you were to go truffle hunting in the wilds of Le Marche -- Amandola, to be precise -- which Seinfeld character would you take along? Kramer? Hell no. Jerry, George, Elaine? Nehhhh.

Ok, what about J. Peterman? Ah, now you're talking. The intrepid outdoor clothing designer would surely be the perfect companion as you slide down a mucky hillside into a dense forest following over-excited hounds (possibly sporting a wine-induced hangover).

Yes, J. Peterman himself was in Amandola this fall about the same time Eric, Michael and I , accompanied by local experts, went foraging through the woods in search of the elusive Tuber magnatum pico. That's white truffle to you and me. We came up empty, but were later rewarded with a memorable feast.

I was waiting out in the cold and humid air for a couple of minutes when an oversized and scruffy white poodle with an expert pink nose came loping toward me ahead of the local truffle hunters. Soon we were off to look for all-but-impossible-to-find white truffles, known for their sharp, distinctive peppery flavor.

This time I'm in The Marches, the part of Italy due east of Florence. It's true that Piedmont, far to the north, is the best-known white truffle region in the world. But with more and more of the forests where these addictive tubers thrive turned into vineyards, the region is becoming more of a market for truffle buyers and sellers than a territory for hunters. I admit I'm a buyer when that's my only option. But I prefer the hunt.

and how'd he fare? Being J. Peterman, eureka!

She [the dog, Dora] finds two smaller ones before we call it a day. The nearby town is called Amandola, and a few hours later it's dinnertime at one of the village's trattorie, a fire raging in the corner. Soon, the plain cooked fettuccini we ordered will arrive and we'll transform it with a few delicate shavings from our afternoon hunt. There's a bottle of the local Sangiovese on the table between us. Dora's owner ordered the wine, saying it was simple enough to get out of the way and let the truffles be the star. As if anything tonight could upstage our hard-won treasure.

And what about Eric, Michael and I? Nuthin! We'll score some next year. Promesso

A special shout out to ISB reader, Tigers fan and fellow hunter Eric. He spotted the article yesterday while on his daily giro through the celebrity gossip pages.
Posted by Bernhard Warner at 8:58 AM No comments:

Don't want to work on Graziela's farm no more 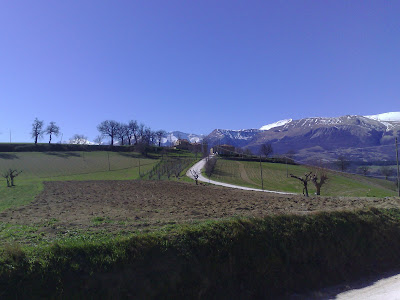 This past weekend we were in Amandola, the first time we'd been up there since the New Year. It was another example of Marchigiani propaganda at work: crystal clear blue skies (perfect for BBQing Mario's famous ribs), a Saturday night feast at the always reliable Da Priori in Monte San Martino and some fine local wine to top it all off. By my calculations we ate cow, pig, lamb and various critters from the sea, my idea of a perfect get-away from an otherwise crazy work schedule.

We (Xtina, Lara, Stefano, 6-year-old Davide and me) also paid a Sunday morning visit to Graziela's farm to say hello to the rabbits and chickens and roosters and cows and pigeons. 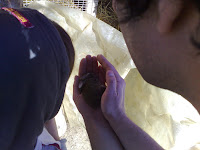 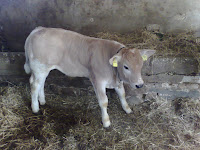 I'll tell the rest in pix. Graziela took us on a brief tour of the farm to see days-old rabbits (cradled in Stefano's palm at left) and weeks-old calves (posing for a picture here at right, giving us her more flattering side). Another one of her cows is pregnant, expecting around September.

We then went on a long walk to check out the latest progress on abandoned houses being rehabilitated for new homeowners. Sant'Ippolito 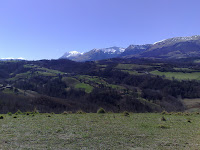 has plenty of case abandonatte lining the hills around the house. Some even have dirt tracks leading up to them. It sometimes takes a bit of a hike to get anywhere near these properties, but the views are spectacular and always worth the effort. Here's a view (at left) of the Sibillini National Park, a perspective I've flashed up here before. But this time, with the blue skies and the snow-peaked tops, I couldn't resist snapping another one. And finally, a view of Casa Chiocciola from down the hill at Graziela's farm (the big picture at the top of this post).
Posted by Bernhard Warner at 5:48 PM No comments: