I have this tendency to grumble to anybody who'll listen about Rome and its graffiti problem. Our 'hood, Garbatella, in particular, is covered in grammatically dubious expressions of teenage love scrawled on the side of walls, on benches, on playground swings. Slow-moving nonne, I'm convinced, are at risk of getting a "Ti amoooo, Giovanna" declaration across their house dress. Nobody else seems to share my irritation though, so I thought I'd grumble about it here.

You see right outside our apartment lies the university, Roma 3. There are acres of clean wall space that are just taunting the aspiring graffiti artist. Until recently. A bunch of characters every other weekend sneak down to the tracks below the house and go to work on the wall of one of the university buildings that abuts the railway. I've begun to document the gradual transformation from nondescript building to urban canvass. With it, my opinion is beginning to change...

The first batch of photos were taken on the morning of June 1st after I noticed a new batch of boxy letters scrawled on the building below: 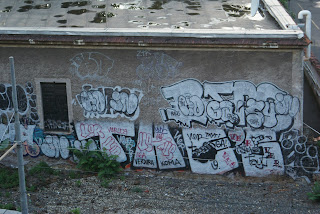 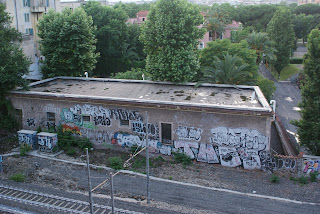 And then, last night I woke up around 3 a.m. to catch an inning or two of the Mets-Yankees game. It was a warm evening and the windows were open and, at one point in between innings, I hear that unmistakable rattle of spraypaint cans. I peered out from my salone into the darkness below and could just about make out two figures in black busy at the foot of the same building. Remarkable to me was that they did the work completely in the dark. They had no lights and there was just a sliver of a moon in the sky. Here's their handiwork: 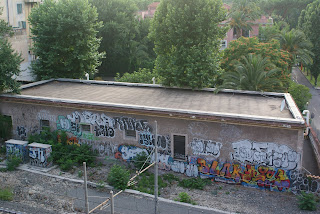 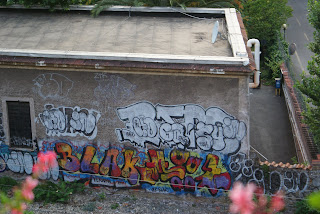 The latest embellishment is certainly an improvement. So, I'm starting to refine my opinion of graffiti. If done well, it's not so bad. It adds a little color and life to otherwise drab city walls. The meaningless exclamations, hastily chucked up on a building, they are nothing more than vandalism. The graffiti artists should be more angered by these amateurs than me.
Posted by Bernhard Warner at 8:01 PM No comments: