Rome, from pilgrimage to pub crawl

Once again Peter Kiefer at the Times writes a gem about life here in Rome, this time about those hard-drinking, hard-partying tourists who, to the chagrin of the locals, turn Campo dei Fiori and Trastevere into heaving party spots when the sun goes down. I've had a few drinks with Peter in Campo dei Fiori. He knows what he writes about.

Not sure I understand fully this quote though:


“Why would you come to Rome to drink beer when you can do that anywhere else in the world?” said Giuseppe Strappa, an architect and professor who has written extensively on the changing face of Rome’s historic center. “The value of Rome is its urban tissue.”

Urban tissue? Must be what the young clubbers are taking these days.
Posted by Bernhard Warner at 2:21 PM 2 comments:

A few weeks ago Xtina came back from the Philippines trailing a monster duffel bag filled with local handicrafts, the labor of some enterprising locals who live in extremely impoverished conditions. The crafts were put up for sale this weekend as part of a charity event for Xtina's NGO to raise some much-needed funds for these communities back home: financing things like school supplies (where there are schools).

The products were of a remarkably high quality. But that wasn't the real draw. The locals crafted the bags out of refuse. One woven bag was made of pages ripped from the phone book. If you looked hard, you could read off surnames, partial and whole, like "Cruz" and "Sant-something". Others were made from soda cans, juice packs and plastic shopping bags. Recyclable chic! I couldn't help but think these handbags would be all the rage in the funkier parts of Shoreditch and the East Village.

Not surprisingly, they sold pretty quickly to the trendy shoppers (and Luca). Here, the lovely Giulia models the juice pack bag: 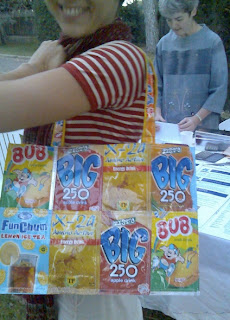 and nostro Luca with the phonebook-weave bag, presumably a gift for one of his many admirers: 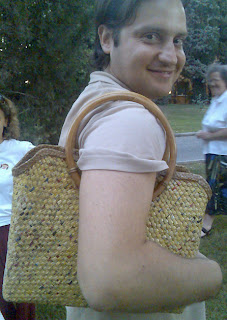 Please give a hand to our models. Che belli!
Posted by Bernhard Warner at 9:24 AM 3 comments:

Perugia homage to "The Sopranos" 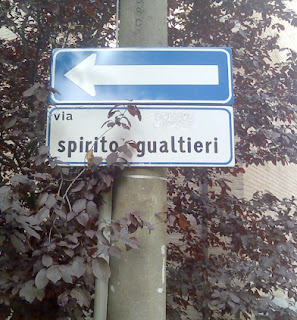 Within hours of the finale, city planners went to work renaming streets while locals now drop the last vowel on all meat products.
Posted by Bernhard Warner at 11:33 AM No comments:

Last summer, I ran into a common traffic snarl in the country on a bend in the road by the house: a pack of four-legged commuters. I took these snaps with my mobile and finally got around to posting them here. 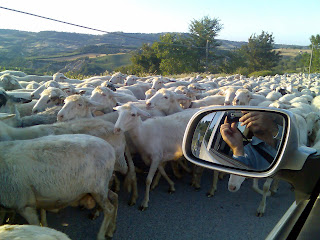 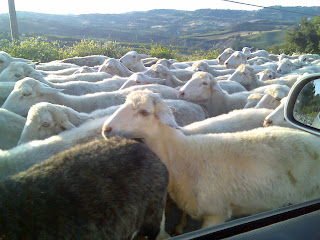 Posted by Bernhard Warner at 9:20 PM No comments:

It's June. This can only mean my brother, Chris, is somewhere in Pakistan, literally on top of the world. He is again leading an expedition to summit K2, what mountaineers call "The Savage Mountain". 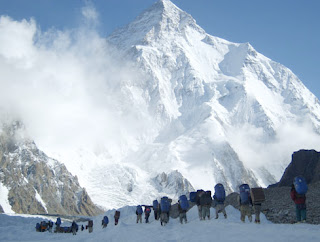 He's been there before, but this year the expedition is kitted out with multi-media. Chris and the team are blogging and posting video (including one of a crevasse rescue) almost daily. Check it out here.
Posted by Bernhard Warner at 9:18 PM No comments:

This morning. The 11:15 a.m. aquatic aerobics class for seniors at the local pool. A dozen wrinkly nonnas enthusiastically doing their 1-2-3 kick, shoulder shimmy, step to the bass-thumping club favorite, "Yer my bitch".
Posted by Bernhard Warner at 4:45 PM No comments:

Romans are a bit antsy today. The Leader of the Free World and his wife, Ms. Free World, arrive this weekend. Today, the itinerary was published.

On Saturday morning, Bush meets with Pope Benedict to discuss, no doubt, favorite 14th Century views on Islam and present-day Iraq. If there's time, Benedict will quiz Bush in the sciences. True of False: life on earth began 6,000 years ago.

Laura Bush, meanwhile, will get a tour of the tony 17th Century Villa Doria Pamphili. (Xtina and I were there in April for a rare tour. The interior is spectacular despite efforts by previous landlords to blot out all the good stuff. When the Belgians used it as their embassy in the 19th Century, they covered the pink marble ceilings in a white plaster-like paint. Not my first choice.)

In a twist, along with the typical meetings at Palazzo Chigi and the Vatican, the prez will come to our side of the river, to Santa Maria in Trastevere, to be exact. Yesterday, Italian authorities were trying to talk Dubya's handlers out of such a stop, the narrow, winding alleys of Trastevere being a difficult assignment for anyone to police. But, it appears, the American contingent will proceed as planned. He's then on to lunch with Prodi, an aperativo with Berlusconi and dinner with the Ambassador.

We get a lot of requests here for suggested Roman itineraries. This time, nobody's asked. But seeing as the White House reads my blog regularly (Googling for the Sette Bello restaurant in nearby Alexandria, Va), here's my suggestion:

1. Get the Pope, Prodi, Berlusconi meetings over with before lunch. Start early. Remember: No cappuccino after 10 a.m.!

2. For lunch, come to Pizza da Claudio in my neighborhood. You can take the Number 8 tram. You cannot miss Claudio. All the cabbies eat there. You'll see them all double-parked in front. Careful when you cross the street. Red lights are discretionary for most Roman motorists, making it tricky for us to cross the road. And we didn't launch an unpopular war.

3. Afterwards, head to Ostia on the coast. The dunes are lovely. Just don't head too far south -- if you hit the gay and nudist beaches, you've gone too far, particularly if you've got any Vatican hangers-on with you still.

4. Evening: Stay in Ostia and boooogie! Italians are internationally recognised as the worst dancers in the G8. Your moves can only help.

5. Back to Trastevere. A cup of cinnamon ice cream at Gelateria alla Scala.

7. By now, it must be 2 a.m. Time to throw eggs at Benedict's window. It'll be hysterical. He gets up early on Sundays for Mass! (This one's between us.)
Posted by Bernhard Warner at 8:20 PM 4 comments:

Move over "ugly American", you've got competition. So says The New York Times as New York gears up to be overrun by European tourists this summer season. Lured by the absurdly cheap dollar, these vacationers, with a slippery grasp of the language and unaccustomed to tipping (20 percent?!?) and orderly queues (Italians... colpevole) will be walking-talking ambassadors of the EU abroad, stomping on flower beds and urinating on Broadway, no doubt.

Please report back to me on how it goes.

Here in Rome, you can't escape the clueless tourists who keep the otherwise shaky economy alive. The nationalities are easy to spot. The Americans, massively overweight and loudly informing everyone they have never seen such wonders before, walk around town dressed in picnic attire. The Brits are crimson after a day in the sun, boozing at sidewalk cafes. The Germans wear sandals and socks. The Japanese (and now, the Chinese) converge on landmarks in hordes. The Russians are guilty of all of the above.

But, guess what? I've traveled with the other side: Brits and Italians and Germans too. They're no better. After meals, Germans get out a calculator or strip of paper and tally up everybody's tab, down to the penny. The French and Belgians are cheap, so says Belgians and French I know. Italians, a bit jittery from the bad coffee, substitute the chemical withdrawal with nicotine. Cigarettes all day long. Who's the worst? According to an Expedia study from 2002 that really must be updated: the Brits. They are the most rude, gastronomically timid and incapable of picking up a few local phrases. Wonder how they'll fare in New York speaking that funny language?
Posted by Bernhard Warner at 12:00 PM No comments: