A wine worth trying

I use ISB from time to time as a handy notebook, making mention of some nice wines I've had so I can remember and access them later, and maybe pass on a tip or two.

Last night, Xtina and I dined at a fine restaurant in our new 'hood L'Acino Brillo, dining on a generous gift certificate from my brother Chris and his wife Melinda who were in town last week. L'Acino Brillo has a spectacular wine list, and so we decided to splurge there. We decided on a Lagrein, a flavorful grape variety indigenous to the German-speaking Alto Adige region. It's one of my favorites.

We chose the Lagrein Riserva Abtei, 2004, from Muri-Gries, which is a monastery outside Bolzano. Che fantastico! Incredibly smooth, a little spicy and a powerful perfume. Here's what the makers have to say about it:

This wine features dark ruby shades and a deep flavour of ripe cherries, berries and plums. It sets free agreeable spicy chocolate and coffee flavour notes resprectively. It has a juicy, fleshy and extremely elegant structure with a concentrated outstanding tannic body and velvet-like roundness. Besides, its pleasant taste does not fade away soon.

If you can find it in your hood, grab a bottle.
Posted by Bernhard Warner at 12:42 PM 3 comments:

How big is your bird?

In certain countries, those five words will earn you a fat lip. But here in Italy it's a perfectly reasonable conversation starter. It's a question I've asked more than a few times this week. You see, I'm on turkey (tacchino) duty.

A friend has been gracious enough to host Thanksgiving dinner at his place in the center of town on Friday night. I offered to buy the bird while he's out of town. We went over the preparations on the phone just as he was catching a train north. I took down the following details:

They'll be eight or so of us, he informed. We'll need a big bird.

To source anything bloody, I usually head straight to the market in Testaccio where our favorite fish monger, butcher, veg guy and my candidate for the Nobel Peace prize, the tomato guy, have their stalls. This week, however, my motorino has been out of service, and so I ventured down the street on foot to the neighborhood butcher.

When I mentioned tacchino his eyes lit up. Sure, we can get you a tacchino, he said. How big? They'll be eight of us, I said. Before he could jump in and do the calculation, I informed him: 12 kilos!

He glanced at his partner, and said, sure we can get you a tacchino!

How much?, I ventured.

Can't be, I protested. It's just a turkey. How could it be so pricey?

He didn't like where this was going. To bolster his credentials, he told me he has a lot of American clientele, employees of the UN's food program, or FAO. They always order turkeys from him, he said, pointing to a calendar on the wall with scratch marks scribbled on the Nov. 22 box. I was starting to get that "acchiappa svizzeri" feeling. Whenever I hear the word "FAO" (pronounced "FOW!"), I get a little unnerved. These people live tax-free. To my mind, they overpay for everything. Of course they'd pay 80 euros for a bird, and then have a good laugh about it over dinner.

Hearing the word "FAO," I tried gracefully to back out of the deal. I told him I'd get back to him after checking around. I called Xtina, who, no turkey expert, said 6-7 euros per kg seemed reasonable. You pay 15 euros for a nice cut of veal, she reasoned. It's just a turkey, I responded, the second time in 10 minutes. Not convinced, I called my mother-in-law. She too is no turkey expert. She tried to steer me towards rabbit. You won't be able to find a 10 kilo-rabbit though, she responded, before bursting into hysterics.

I have learned enough to know that when your sweet will-do-anything-for-you mother-in-law starts to bust your chops, it's time to reassess the situation.

Just then Xtina pulled out our squat cookbook, "La Cucina Italiana" to ease my puzzlement. Every turkey recipe I could find in the book called for 4 kg of turkey, and each said it serves 12 people. Half convinced, I then fired off a few emails asking, how big is your bird?

The New Yorkers were shocked. 10 kilos!, Jim exclaimed. Do you have an oven that big? (He's cooking for 10 and bought a 15-pounder.) Adam is preparing a similar feast. He gave me a helpful formula: it's usually one pound per person. My mom concurred.

Armed with this info, I still wanted a second, erm, sixth opinion. I headed to my regular butcher in Testaccio (my moto is back on the road) this morning with Xtina. When we arrived, he had a nice sized bird in the window. "5.50 euros/kg", read a large plastic price fork stabbed into its belly.

How big is that tacchino?, I asked. No, not a tacchino, he informed. It's a tacchina. A she. Do you know the difference? No idea, I confessed. The female is more tender, he said, not nearly as bulky as the males. You can plop her right in the oven, no need to tenderize her.

Yeah, yeah, yeah. But will it feed eight of us?

She's 7 kg and she's sitting in my fridge right now. Set me back 38 euros. The hard part, thankfully, is over.

Buon ringraziamento, everybody!
Posted by Bernhard Warner at 5:36 PM 2 comments:

One for the vino file/phile

Dedicated readers of this blog will probably recall my occasional reference to two little-known grapes from Central Italy that have been creating a bit of a murmur among the vino conoscenti: pecorino (bianco) and lacrima di morro d'alba (rosso/rosato).

I wrote an article about the rise of little-heralded Italian grapes such as these for a fine local publication here in town, Wanted in Rome. Both wines would be a nice compliment to a proper Thanksgiving meal, if you were serving rabbit or sea bass. Now,that would be a nice tradition. Think I'll start that holiday myself. 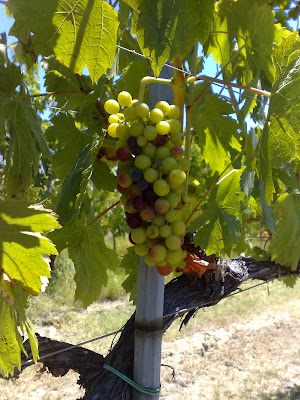 The lacrima di morro d'alba ripening on the vine this summer under unrelenting sun.
Posted by Bernhard Warner at 11:11 AM No comments: 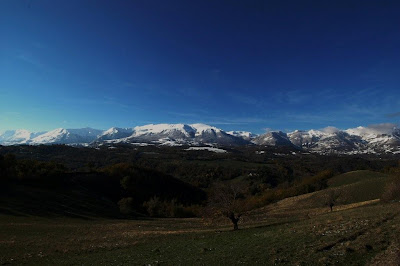 We've had a blast of winter here in the bel paese this week. Over the weekend, the mountains around Rome were white-capped. Further east, up Amandola way (pictured here), there was the first serious snowfall of the season.

Michael snapped these fotos this morning from the field next to our houses. Two weeks ago these slopes were gold, red and brown. Now, it's just white. Che belle! Bravo, Michael. 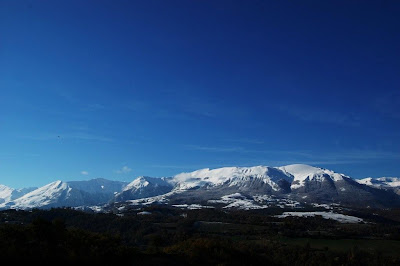 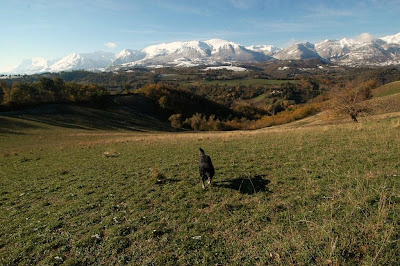 (BTW... my editors are not publishing my truffles story until next autumn. But you can get a sort of preview if you check out Michael's version on his blog. I wonder what Michael pays per-word.)
Posted by Bernhard Warner at 5:20 PM 1 comment:

Is Perugia the Ibiza of Italy, as the Corriere della Sera reports? I've never seen any evidence of that. These days, the Etruscan wonder is splashed across the pages of British tabloids, discussed on chat shows and her bones are picked clean by bloggers (not this blogger.)Locals wonder if normality will ever return...

I've been quiet on the topic of the grisly murder that occurred in Perugia earlier this month. It's shaken many of the Perugini we know. Eric wrote this piece over the weekend that tries to sum up the impact the spotlight has had on the city. Some of the names may be familiar to you.
Posted by Bernhard Warner at 11:24 PM No comments:

I have an odd attachment to my trees, particularly the olive trees. Xtina often says I love the trees more than her. This is simply not true. I love her and the trees equally. Most days.

Last year, for the first time, the olive trees finally produced, though the yield was pretty poor. This year, I can happily report, both trees gave us a large basket-full of olive goodness. The smaller of the two trees produces the hefty olive ascolane. The second, larger tree (pictured below) produced Italian black olives. 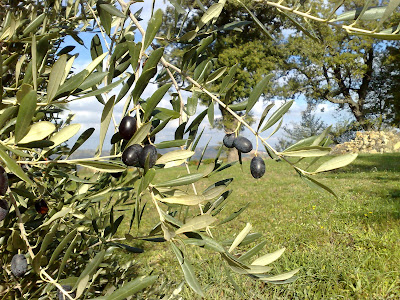 Update: A few weeks later now, and I'm trying the first batch. My mother-in-law has prepared them with orange skins and a bit of salt. They're a bit pruny, with a lightly bitter after-taste, but very nice! Next year: oil!
Posted by Bernhard Warner at 3:33 PM No comments:

On the trail of Tuber magnatum pico 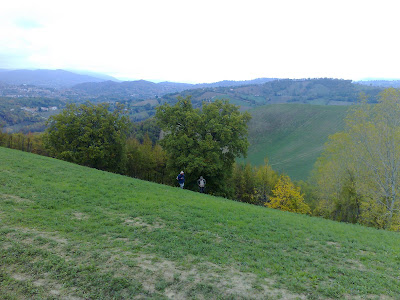 Last weekend was a rare treat. I went hunting with my neighbor Michael and a journalist friend from Rome Eric, searching for the precious tuber magnatum pico, or white truffle in the hills below my house in Amandola. A year ago, I learned these pungent aphrodisiacs (or so some claim) can be found in certain wooded sections in the valley around the house, and so I organized a giro with local tartufaii Alberto Mandozzi and Marcello Bianchi. We were hoping to find one or two under an oak or birch tree. Finding one, it seemed, would be the only way we could afford this delicacy this year. Why's that?

Well, I paid last year 30 euros for a 30-gram piece. This year, an equivalent piece could be had for between 150 and 180 euros; an incredibly dry spring and always-high demand have sent prices soaring. As a result, I bought the cheaper, and not nearly as good, black truffle. Set me back 17 euros. As Xtina said again this year, "once you go white, you just can't go back."

How'd we do? We didn't find any, but we were invited to a decadent meal hosted by the local truffle hunters association in Amandola, of which Alberto is president. It was a meal that will not be forgotten: a seven-course marathon, four of which included a healthy helping of white truffle shavings. (Pictured below is la fonduta, a Piemontese soup of several types of cheese coated in white truffles.) At this year's price, the meal would have set anybody back a few hundred euros. Thankfully, it was a BYOT affair. We ate what the association managed to unearth this year. Che fantastico! 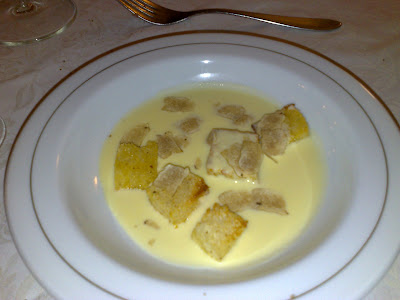 Posted by Bernhard Warner at 2:59 PM No comments: