"OK" may be the most common phrase in the world, it's also the most troublesome, some of us clueless ex-pats have learned. Here's a humorous piece by David Sedaris explaining why.
Posted by Bernhard Warner at 9:45 PM No comments:

Why do Romans hate Milan? Perhaps it's the undies

This post comes to us from Milan, by way of a loyal reader in London.
But first, some background:

Milan, according to i Romani, is another country, another planet maybe. The Milanese, of course, feel the same way about the Romans, (perhaps with a bit more charitable view of Rome than its natives). Me, I like both cities. But I probably wouldn't ever leave Roma for Milan. It's probably because I hear so often Romans agitating about the fear of being relocated to Milan. (Londoners, think Birmingham. Right. Scary!). This sense of different-ness was recently reinforced by a tale now making the rounds in Rome among our friends. Francesco quit a perfectly good job, the story goes, this summer when work relocated him to Milan. The Romans applauded this bold move. I wasn't so sure. But then he found another good job in a dumpy town south of here, Pomezia. He couldn't be more happy today. No more 4-hr train trips back and forth between Rome and Milan twice a week.

How, is this background for a story about SMS alerts for laundry? Think different-ness. In balmy Rome the weather rarely changes. It's sunny all the time. Thus, no need for the service described in the article. But, the Milanese apparently have the Romans beat in the underwear department, I type with a scowl as I look out into my courtyard, house dresses flapping in the breeze.
Posted by Bernhard Warner at 7:32 PM 1 comment: 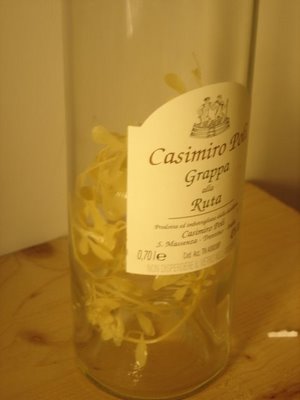 The contadini have been making grappa for millenia. After the annual grape harvest and wine pressing each fall, a mulch of grape skins and seeds is left behind. It's this mulch that is distilled once again to extract highly potent alcohol. The result is good ol' firewater, what the Italians call a digestivo, a perfect capper on a fitfull meal. Last night, Luca, Xtina and I finished off an old bottle of grappa from Trentino that I've been serving after meals for months. At the bottom we found this spindly creature, a root plant called Ruta.

I'm debating what I should do with the Ruta. Fish it out and add to a nice autumn stew? Dry it out and smoke it? Hang it upside down over my doorway to ward off my pesky neighbors? Press it and frame it? What would you do with a crunchy piece of flora that's been part of so many good evenings? Throw it out, is what Xtina would say. Help me convince her that the Ruta is now family. What should I do?

Posted by Bernhard Warner at 9:51 AM 3 comments: 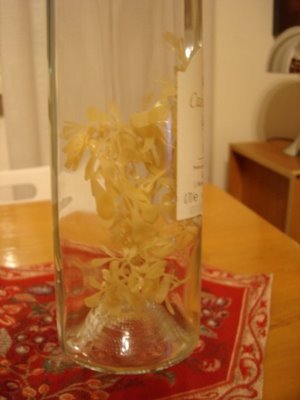 The tree of life?

Posted by Bernhard Warner at 9:50 AM No comments: 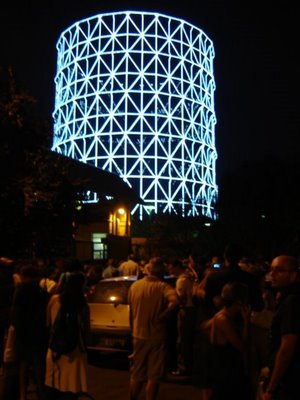 Paris has its Eiffel Tower. Manhattan, the Empire State Building and Vegas, its Vegas. Now Rome (for a week, at least) has a collossal mega-watt structure to join the illuminated metropolises of the world. Here, we unveil Gasometro (pronounced gas-so-MET-ro). No, it's not a publicity stunt for an antacid formula. It's Italgas' skeletal petrol depot on the banks of the Tiber (viewable from my flat).

It was introduced to i Romani this Saturday night as part of the Notte Bianca festivities -- an all-night, all-free walkathon of concerts, open museums, etc. Everyone flocked to Gasometro thinking that acrobats would dangle from the rim in truly spectacular fashion. We arrived to find kids tossing handkerchiefs in the air and Romans agitating that somebody must pay for leading us astray. Our friend Franco called the Commune switchboard at 11 p.m. The conversation went something like this:

Franco: Right. Under. Gasometro. And we can't see a thing.

Perhaps out of guilt, the good people at Italgas (my gas company, btw) will keep the structure illuminated for a week. The electricity costs will no doubt be covered by customers.

Posted by Bernhard Warner at 9:03 AM No comments:

Hooch with a kick

Well over a year ago I started nosing around on a story that was too crazy to be true: an EU project to remove wine from the common market and re-sell it as factory-grade fuel. In an era of near-$80-per-barrel fuel prices, it makes some sense. And, there is precedent. During WW2, most warring European nations confiscated huge amounts of produce from the domestic market to make fuel. A little known fact is that part of Italy's war machine was based on apricots and other citrus fruits. Ditto for Germany, England and France.

How is this possible? Any fruit or veg containing enough sugar can be turned into ethyl alcohol. If potent enough, it can be used as a fuel or fuel additive. And, it's being done today. Here's my piece for Wired on the topic.
Posted by Bernhard Warner at 10:53 AM No comments: