Business, financial institutions, and investors throughout the economy rely upon derivatives to protect themselves from market volatility triggered by unexpected economic events. This ability to manage risks makes the economy more resilient and its importance cannot be underestimated.

The answer is "C". Mother Jones has the full story. Warning: objectivists may object.
Posted by Bernhard Warner at 2:43 PM No comments: 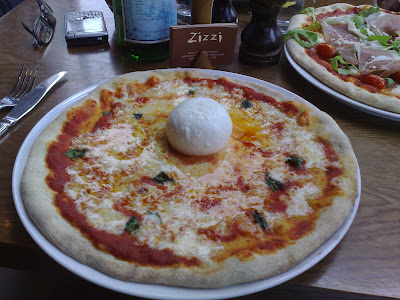 A reader at The Big Money authored this brilliant Dylan-esque number, Subterranean Dow Jones Blues.
Posted by Bernhard Warner at 12:39 PM No comments:

And you were expecting an analysis of, what, the fall of global capitalism? The end of Wall Street? The undefeated NY Giants (or, "Giganti," as Xtina says)?

Nah, this post is about food, and, yes, it will circle back to include all the themes above, metaphorically speaking. Xtina and I were in the northern reaches of Piemonte (Piedmont) this weekend, not far from the Swiss border, or, if you're keeping score, the French border too. Armed with our trusty Slow Food guide we made our way on Friday night to Biella, a city that was at the center of Italy's industrial revolution, famous, back in the day, for its textiles factories. These days, it's famous for, non lo so. No matter, we were hungry, and the guide book highly recommended Ristorante Baracca. Sold.

To the uninitiated, I should say here, Piemonte is one of the true culinary gems of Italy, a place I first read about in one of Jeffrey Steingarten's zany journeys to find the meaning of life in a dish of pasta. Close to the French border, Piemonte specializes in richer, heavier dishes than we get here in Central Italy. Comfort food, as they say. Risotto in buttery, cheesy goodness, for example. And the wine? This is Big Red country. Barolo, Nebbiolo, Barbaresco.

We booked a table as we zipped up the superstrada and miraculously found the place without any help whatsoever from the proprietor. ("Go to the Questura. And park," were his instructions.)

Once inside, the first shock is the prices. There was not a single item on the menu priced above 10 euros. And the wine, all excellent, was equally reasonable, cheap even. We each picked an antipasto, primo and secondo and then a 40-euro-bottle of '97 Barolo (a can't miss-year if you happen to find one) and the check came to just 72 euros. Try that at home. A bottle of '97 Barolo, if you are so lucky...ok, you get the point.

I'm going to zip through the first two dishes. L'antipasto locale was, in a word, squisito. For a primo, I had the agnolotti dripping in a meat gravy. Xtina had a heaping dish of risotto that she had difficulty finishing. For the main course, I ventured into new territory: lingua bollita. Yep, boiled tongue. There are people who walk this planet, I was told before ordering, who rave unintelligibly about the virtues of boiled tongue. Who? My father-in-law, Xtina informed. Again, sold.

Boiled tongue is a bit of an experience. It stews in a deep pan that sits on a wheeled cart. And, when it's on the menu, it goes fast. The waiter and waitress push the cart back and forth across the restaurant to beckoning tables and slice up the tongue as select diners gurgle in delight. They then serve the meat - it's grey, tender, slightly spongy - with a selection of condiments: spicy mustard, pickled fruits, garlicky pesto, tangy mayo, and so on. My explanation here, I realize, does not do it justice. It's like a really tender Sunday roast, if oddly shaped. It's just that when the tongue emerges from the stew, speared by its handler, it looks completely out of context. It's unmistakable: it's a massively inflated slithery tongue with a knob of meat on the wide end. But, I have to say, lingua bollita is really worth the culinary adventure. If you are a bit squeamish, buy yourself a nice bottle of Barolo to wash down the first few bits. Afterwards, you'll be licking your plate. It's that good!

And here are a few more tips:
1) The trick is to get a table and order early. My advice: don't order the tongue after 10 pm. Who knows what you'll get as the carving knife edges closer to the tip.
2) No matter how tasty, don't get carried away. For example, it's never polite, mid-chew, to stick out your tongue and ask your date: "Can you guess which tongue is mine?"
3) Be careful: when chowing down on such a dish, even polite gestures can be misconstrued by your date. Regardless of the context, "would you care for a little tongue?" just doesn't sound right.
4) If your date is an anti-vivisectionist, it's probably wise to skip this dish altogether. (I once dated an anti-vivisectionist. Turns out it was the only thing she was opposed to... You're right, bad joke.)
5) Don't ask where the cook sourced the tongue. Does it matter?
Posted by Bernhard Warner at 9:03 PM No comments: