...meanwhile from the other side of the planet

While I've been doing the glamorous movie thing, Xtina has been on the other side of the world on another mission for her NGO, this time in South Africa. She's been back and forth between JoBurg, Port Elizabeth, Pretoria and beyond, usually in the most desperately poor neighborhoods.

She sent me this email update that I thought I'd share with you:

You have to imagine the poorest place you have ever been to, a desert dotted with little laminate shacks, no outdoor illumination, nothing. You drive along the main road in total darkness and suddenly you see this huge construction, temple-like, a piece of Vegas in the middle of nowhere. Lights, guards, 5 stars hotel, lounges, a vast green park (outside there is a very dry land), and slot machines, hundreds. The Sisters told me that the whites that come here look only for one thing. Guess what. I think this was the most outrageous contrast I have ever seen in my life. Probably people here are used to it.

This morning (wake up at 6) we went to another mission in the poorest village...they have a clinic, well organised with many girls that study and volunteer as home care assistants, especially for AIDS patients. Very nice girls, they walk for kms to get to their patients. Then they have nursery and pre-school. Tons of kids screaming my ears off. They don't have enough brick classrooms, the youngest (2-4) stay in containers...so hot...

They took me to visit a couple of patients, one woman with polio in a wheel chair...she was so happy that we brought her a new one...and the family with AIDS. The woman was very proud to show me her wedding dress...she did it herself...they have nothing else, four walls and nothing inside, bare rooms with some linens but at least they have gardens in the back where they grow vegs. They live off the government grant, 80 euros a month.

The thing that shocks me the most is that there are no men around. The women do all the work, in the gardens that the sisters give to the women to grow vegs I saw 2 pregnant women carrying water, ploughing the land...no men. They don't feel responsible at all, they wander around, play football and many of them steal as much as they can during the night. Thieves broke in here several times and stole all the computers...

I don't feel too sad, I explained to the girls today that even if they don't see it they have a lot. They have a community, a network of people, they have their land, they have the opportunity to study..I wouldn't exchange this with a struggling life in the city...I don't know if I was very convincing.
Posted by Bernhard Warner at 10:14 AM No comments:

A special "red carpet" complimenti! to nostro Franco this morning. I attended last night his Rome Film Fest screening of Zero, a jarring 9-11 documentary. A packed cinema in Rome's Campo dei Fiori was the setting. Franco, the co-director, has been all over the news with the film in the past few days. On Tuesday, he strutted down the red carpet, accompanied by the screams of adoring fans no doubt.

I have to admit, I was a bit skeptical initially of the public's appetite for yet another conspiratorial 9-11 documentary, but this one is well worth seeing. It's amazing how the natural inclination of Americans is to just shut that day out, and not seriously consider all the incongruencies of that attack. I met and interviewed the father of a man who was killed in one of the towers that morning last night. He's spent every day going over the details, and he's convinced we've all been lied to. Before you groan, do yourself a favor and find this film.

And thanks, Franco, for bringing it to the big screen.

Check out the site for more details.

Buona fortuna, amico!
Posted by Bernhard Warner at 9:35 AM 3 comments:

That's the very real concern around here. Well, from where I sit at least. A new d(r)aft law requiring all bloggers and users of social networks to register with the state has already passed one legislative hurdle. In the fresh light of day, it is being reconsidered in a slightly weaker version, but the "anti-blogger" law as it is being called is still alive and well. I wrote about the implications in my latest Times column, dubbed "A geriatric assault on Italy's bloggers." (I had nothing to do with the headline, but I think it's apt).

UPDATE: Apols for those who clicked on the link and went nowhere. I wish I could say it was the Italian censors forwarding you into a "404" black hole, but not so. Anyhow, the link is corrected. What I want to point your attention to is the number of angry young Italians who have responded to the story. 68 so far! I really despair at times for the youth of this country. They are completely ignored by the ruling class. Read their comments, and you'll see.
Posted by Bernhard Warner at 7:34 PM 2 comments: 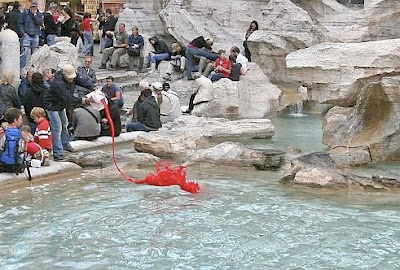 Marinetti and Balla would have never stood for such an act!
Posted by Bernhard Warner at 6:35 PM No comments:

An hour to kill?

Then you must do yourself a favor and download (for free over the next few days), "This American Life's" latest gem, about high-security inmates' portrayal of Act V of Hamlet. You'll never think of Hamlet, Claudius, Horatio, et al again after you hear convicted killers interpret these roles.
Posted by Bernhard Warner at 8:03 PM No comments:

Ok, I've been in for a few days now; Xtina even longer. It's been several weeks delayed, and we still haven't managed to rid ourselves of a Romanian crew of workers, but we can officially say that the offices of Il Sette Bello are up and running in the new location. Please note, *reader mail should be sent directly to the embassy in Rome. Your embassy, not mine.

* - if it's a bottle of wine, contact me directly.

So, where is Garbatella exactly? It's on the other side (the Colosseo side) of the river, on a hill overlooking St. Paul's, a magnificent basilica that mercifully gets a tiny fraction of the pilgrims that usually converge on St. Peter's. Garbatella was the first community in Mussolini's grand urban plan, il Duce's idea in the '20s to extend Rome beyond the ancient walls and give everybody a bit of breathing room.

Mussolini's imprint is still visible today. Many of the buildings are adorned with an "E.F" for "epoca fascista" followed by a IV or V or some other Roman numeral, meaning built in 1926 or '27. (That's 1922 plus 4 or 5 for those of you scoring from home.) These days, Garbatella has flipped to the left, or so it appears from all the hammer and sickle graffiti in evidence. But the locals still like their Mussolini-inspired houses. And, there's a great teatro in the area that we've been known to check out over the years that has some funky avant garde productions.

And what about today? Garbatella was in the local press this week with Il Messaggero asking is "Garbatella like Notting Hill"? Turns out, no, not at all!

Locals got a bit feisty when a film crew from Working Title, the studio that produced "Notting Hill," tried to pay everyone to move their cars. They wanted a car-free street in order to film (or "gira nuda," as the Italians say) a scene with Sienna Miller (fully clothed, evidently) walking through the 'hood.

If I see Sienna Miller out my window (nuda o no) with a film crew trailing her, I'll let you know.
Posted by Bernhard Warner at 7:01 PM No comments: