My journalism students at JCU have been working hard over the past few weeks, developing broadcast reports shot entirely with their mobile phones. Specifically, the Nokia N95. It's called "mobile journalism" or "mojo" for short. Check out their work here on our YouTube Channel.


Posted by Bernhard Warner at 3:23 PM No comments:

A little help from their friends 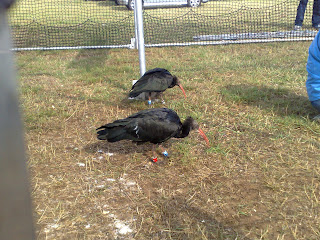 It was almost a year ago, at a cocktail party, when I heard the most incredible story about a project to restore an endangered bird species that, to put it kindly, hasn't evolved well. The Waldrapp ibis over the centuries has lost much of its motivation and its sense of direction, problematic if you are a migratory bird that needs to get to point A down south to wait out the winter and point B up north to breed. 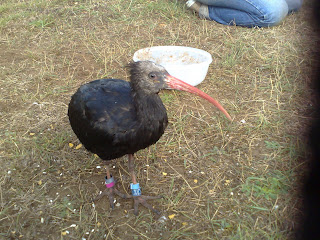 The birds are one of the most precarious in the world. Just a few hundred survive in the wild, and none in Europe. To be sure, the birds haven't helped themselves. They are pokey flyers, have poor motivation and are tasty, evidently. They are true slackers. Still, the Waldrapp Team is heroically trying to revive their numbers. All of this perhaps raises the question: are some species simply not fit for survival in this cruel world?

Before you answer that, read my article in today's Guardian about a determined group of biologists attempts to teach them how to migrate, and, ultimately survive.

And, for more on the research team's efforts, click here. 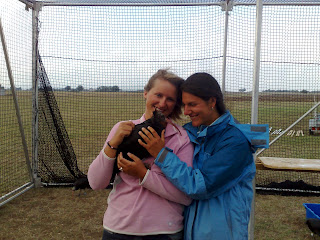 I don't often write about life in Italy for my Times column. Maybe every 6 months or so. Today, with the elections looming, I stuck to what was once the big trifecta in Italian life: TV, politics and Silvio Berlusconi. Even now, on the eve of his anticipated victory, it sounds quaint. Here's the column.
Posted by Bernhard Warner at 5:17 PM No comments:

For the 62nd time since 1946 (yes, 62 years ago), Italians head to the polls next weekend to elect a new head of state, replacing the center-left government that collapsed earlier this year. The former mayor of Rome and media luvvy, Walter Veltroni, goes up against former PM and media tycoon Silvio Berlusconi in a race that few Italians seem to have the stomach for. My dispirited lefty friends debate whether or not to even vote while my right-leaning friends are suspicious of a Berlusconi bis accomplishing anything other than kick-backs to his friends and squashing more criminal investigations into his past.

The Economist, in what's becoming a regular "leader" article, once again weighs in, imploring Italians not to vote for Berlusconi. They're not too high on Veltroni, but, crucially, he's not Berlusconi. (Berlusconi isn't the only one getting the cold shoulder from The Economist edit board this week, mind you. It's time for Robert Mugabe to go too, they write. Europe's richest man and Africa's most craven. Nice company).

Meanwhile, Italy narrowly averted a headline writer's dream this week. A small party, the Christian Democracy Party, threatened to hold up next week's election in a legal dispute over the vaguely similar party symbol used by the much more prominent rival, Union of Christian and Centre Democrats Party. The DC verses the UDC. The head of the DC is named, and no, I am not making this up, Giuseppe Pizza. Good old Giuseppe withdrew his legal challenge a few days later, and now the election is on again, robbing us all of the following headline:

(The Guardian came the closest. Anyone else want to take a stab?)

Dental adventures in the Eternal City

I'm not an avid reader of the dental trades, but I'm fairly convinced that what happened here in Rome this week was a first for the profession. The local media is calling it la chronica del falso dentista.

On Tuesday, police were called to an apartment complex to investigate the sound of gunshots, telephoned in by a concerned neighbor. The carabinieri were directed to the apartment where an incoherent man, after much knocking, answered. Enter: the victim of the shooting. At first, he told police nothing was wrong, that it was merely an attempted robbery. They could go home. Suspecting more, the carabinieri started a grueling line of question that revealed:

1) the man they were questioning was bleeding right there in front of them.
2) The blood was from a gunshot wound.
3) He'd been shot in the leg.

After more lame protests from the bleeding man, he cracked. Yes, he was bleeding. And, yes, it's a gunshot wound.

No doubt impressed by their sleuthing, the carabinieri persisted with their line of questioning, the victim weakening under the strain. The man then recounted what happened:

His attacker, an irate man in his 50s with an excruciating toothache, a toothache apparently so bad it reduces you to thoughts of vigilante justice, approached the victim. He drew his revolver and began firing, right there in the apartment complex.

Ok, but why did he fire at you?

Here's where the confession comes in. The bleeding man had for years been running a dental practice. Except, he has no qualifications, he confessed. You see, our man spent years as a dental assistant. He watched intently, no doubt, filling after filling, handling the sucky straw thing while the dottore did the glamorous stuff: the drilling, the bonding, the scraping and cleaning. One day, looking into a mouth full of crooked teeth, he figured, eh, this ain't so tough. I could do this. So, he bought the reclining chair and the interrogation light and the drills and the sucky straw thing and opened up his own practice, and started working on his neighbor's teeth.

It was all going perfectly well until one patient opened fire.

The police eventually tracked down the gunman and charged him with attempted murder. The falso dentista recovered in the hospital and then was arrested too. For good measure, his ex-wife, son and nephew have also been charged for helping the man open up an illegal practice.

Another day. Another happy ending here in Rome.
Posted by Bernhard Warner at 5:53 PM 2 comments:

Over on The Matthew Online...

... the student newspaper I edit, one of my young ace reporters has a fine write-up on the latest Berlusconi gaffe. You can read it here.
Posted by Bernhard Warner at 5:16 PM 1 comment: