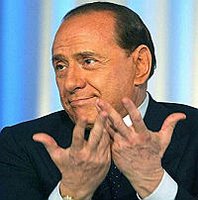 We are just over a month away before Election Day here in Italia. If you happen to visit Rome, Florence or Milan between now and 9 April, you will be greeted immediately by enormous billboard posters featuring a smiling, plastic figurine-like character with the word "Forza" (strength) underneath. Staring across the square is the word "Serieta" (seriousness), characterising the challenger, a jowly-looking character whose nickname is Mortadella (the famous luncheon meat). It's Silvio Berlusconi versus Romano Prodi. Strength v. Seriousness.

Berlusconi, a media mogul, is the richest man in Italy. Through his ownership of the Mediaset TV channels and now oversight of the state-run RAI, his access to the tube is unprecedented for the leader of a modern day democracy. We're not quite talking all-Saddam-all-the-time Iraq of, say, the late 90s, but let's just say il capo Berlusconi can get 30 minutes or an hour of uninterrupted stump speech air time with little fuss. And when he's on the hometurf channels, prepare to be charmed. The picture of Italy evoked is one of mama's cooking and G8 influence.

Trailing in the polls, Berlusconi has been on TV almost non-stop the past few weeks, talking about, well, himself. It's a brilliant strategy. The Italian economy is stagnant, social services are feeling the pinch, and under Berlusconi there seems to be no real assurances for making Italy competitive again. But Berlusconi is tanned. He wears crisp suits. His teeth are pearly white. He is entertaining. And, while the country is sinking fast, Berlusconi's personal fortunes seem to be doing just fine, thank you very much. On the left-leaning channels such as RAI 3, the debate is fierce about national debt, rising production costs, a lack of jobs for the young and rising gas prices that put the puny salary growth into sharp perspective.

Back on a Berlusconi-friendly channel, viewers heard a different message last night. When asked how a worker earning 1500 euros per month could eke out an existence, the country's richest man said: It's simple. Just make more money. Like me.
Posted by Bernhard Warner at 5:31 PM