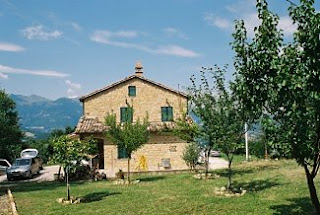 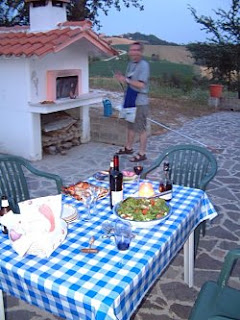 It's probably not healthy to be so attached to an inanimate object. But when that thing is a house that's been standing on a hill for centuries, I guess it's okay. If my arms were big enough, I'd give the place a hug. That's how much the silly place means to me. Grazie, Chiocciola.
Posted by Bernhard Warner at 7:54 PM

i'd hug it, too. it's a wonderful place. (btw...small chance i may be heading to milan for a few days. i'll let you know.)

grazie, amico. and the house thanks you too... btw, michael, it seems, just installed a wireless adsl connection (I don't know how else to describe the technology), meaning the Amandola buro of Il Sette Bello could be up and running any time now... And, please let me know about Milano. It's just a few hr train ride. I've been meaning to get up there to see a few old friends. It's been too long

over here, we call it wi-fi (i think the french say oui-fee). looks like milan's out. the guy (Benedetto) i interviewed -- and was contemplating visiting for a story i'm working on -- totally oversold his role. so i'm off to norwood, mass, instead. not much of a consolation prize. but we're still looking forward to seeing you in SF in October.