Today is an historic day in lil' old Sant'Ippolito. This little hilltop hamlet has seen its fair share of pilgrims, Napolean's troops, and later, Anglo Saxon house-hunting invaders, but never this: Wifi access! Yes, Michael and I, after 2 months of tinkering, cussing the skies, squinting at invisible data relay points across the valley, have finally established a high-speed data link with the outside world. As Xtina quips, now Vitale will be chatting with "le donne di Firenze" ('the girls of Florence', the headline of a notorious spam making the rounds in Italia not long ago. You didn't get it?) from atop his tractor and Graziella will meet an Australian surfer and run away to make movies. I'm not so sure.

The wifi has its teething pains, not nearly reliable enough to go wrecking marriages or plunge distracted farmers into bankruptcy. The problem is a strange one: whenever I'm surfing, Michael loses his connection. Whenever he re-establishes a connection, I get punted off. So now we have a system. I get to the desired Web page and holler, "Ok, you surf while I read/write". And he does the same for me. It's like sharing a brain, I reckon. Everybody is happy.

I've written up the experience for my weekly Times column. When it's up, I'll update this blog. Update: the story is up. Love the headline. Bravo, Holden!

But in the meantime, I'll leave you with a photo of Gualdo, the (supposed) source of our connection. There are two antennae atop the tallest campanile in town that are, in theory, supposed to pump out the data signal to us. The only problem is the antennae are not hooked up properly, so Michael and I are picking up a signal from the more distant village of San Ginesio, 10 km away! We're told they will properly hook up Gualdo "any day now", which should give us a doubly fast connection speed. Speriamo!

If you squint real hard at the photo, perhaps you can see the antennae. If you can, you're lying!

Here's Michael's version of events. Warning there are a lot of kitten photos. Yes, Marina had 4 mischievous bambini a few weeks back - 3 boys and a girl. In March, Lucy had a litter of 8 puppies. Yep, spring has arrived in the countryside. 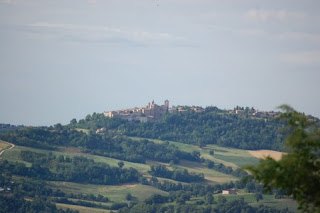 Posted by Bernhard Warner at 3:09 PM