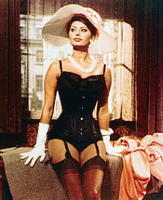 I got into a little trouble recently suggesting that the French are more sexy than the Italians. Actually, that's not so controversial. There are many Italian men who would back up that statement. What really got me into hot water was when I said French food is more sexy than Italian. I believe it came out like this over a meal in the Loir Valley last month.

Me: "Wow this is good," devouring a piece of duck confit.
Still me (after lots of mmmm mmmm noises): "You know, French food is sinfully good."
Xtina: "Pfffff"
Me, after sipping a fine Bordeaux: "Don't get me wrong. I love Italian food. But it's different. Italian food is prepared with amore. French food, S-E-X. And when the sex is this good..."
Xtina: "BEAR-NARD!"

I was not stating a preference, just making an observation. Rich sauces and gravies, butter-not-oil, medieval ways to torture ducks and then spread it on toast: this is what French cuisine is all about. If French food were a celebrity, it would have to be a beautiful French starlet, either Emmanuelle Beart or Paris Hilton. You know: decadent, possibly heart-stopping, all about beauty and presentation.

Italian cooking, in contrast, is a simple concept: it's all about the meat, the fish, the vegetables. No need to smother it with sauce. Keep all the pieces separated: no need to throw everything on one plate at the same time. No need for fancy names and gilded menus. Imagine a young Sophia Loren. In other words, a classic beauty.

This was my poorly articulated theory at the time. But recently, Luca, a Ligurian who makes a fantastic spaghetti vongole, explained to me that my hypothesis lacks insight. You see, he told me, the French use food as part of the seduction. For the French, the dinner table is the first stage of foreplay. For the Italians, the sex-food continuum runs in reverse. After sex, you eat, he said with a wink.

Which may explain why Italians eat so late.
Posted by Bernhard Warner at 10:50 AM

French food is definitely sexier. All that butter and tortured duck creates an aura of guilt and regret, and there's nothing sexier than that in my book.

Anonymous said...
This comment has been removed by a blog administrator.
12:21 PM

Bernhard Warner. Are you the Bernhard Warner that wrote Analysis Internet Media Banned from Olympics? Please let me know. A book publisher would like to reprint this article.

Hiya. Yes, I wrote the Olympic piece you are referring to when I was at the Standard. Do you want to drop me an email at bwarner@gmail.com?