The Thanksgiving that almost wasn't 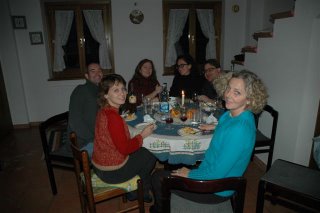 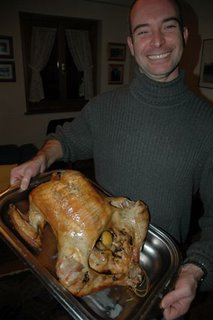 The tricky part about celebrating Thanksgiving abroad is just how conspicuous you appear to the locals. In most countries, harvest celebrations are finished by the end of October. In Europe, I presume, such festas are off the calendar to give everybody the proper prelude to Xmas. (They've had electric snowflakes and blinking Santas on London's Oxford St for over a month now...the Brits really need more public holidays.) As for Thanksgiving in Italy, suspicions run particularly high whenever word spreads that American expats are mobilizing for some type of ritual feeding. And so, I couldn't help but feel at times a bit under the microscope this weekend in Amandola.

There were a few moments last Wednesay when I thought there wouldn't even be a Thanksgiving. My mischievous neighbor Michael was phoning me with panicky weather reports from the front. From the relative safety of Rome, the radio was crackling most of the morning with updates of snowfall in the Apennines, but nothing too alarming. Michael, true to form, added a little color (white) to the reports, likening our little hilltop to a scene out of the end-of-the-world-as-we-know-it flick "The Day After Tomorrow". Surely, the sybills were not pleased with the spectre of Yanks on a 4-day weekend in Le Marche, he seemed to infer. I thought I could hear him grinning on the other end, but I couldn't be sure. In the end, we did get about 10 inches of the white stuff, but thankfully the worst had come and gone by the time we set foot in the slushy town center Thursday morning to pick up the bird. Still, we had no idea what unpleasantness we were slowly driving into Wednesday night as we took the most circuitous route imagineable to avoid the mountain passes. The radio by 8 p.m. was filled with silly DJ chatter about this odd American pasttime called Thanksgiving. This was an informed forum. The talk show host threw out a statistic that 46 million turkeys would go to slaughter to feed the Americans, hoping such a sum would invite from callers moral outrage or worse, recipes. But no such luck. Like Michael, the callers wanted to talk about the November blizzard instead. The topic of American's conspicuous consumption habits would have to wait until the weather improved, perhaps next spring.

Thankfully, Mario, our village butcher, was all business Thanksgiving morning. We were his only turkey customer that day and so he tried one last time to sell us the biggest bird he had -- (20 kg/44 lbs now. What are they feeding the turkeys in this town?) -- but we wouldn't hear of it. We got one that weighed in, on the imperial scale, at about 15 pounds. I then went off to the bank to check on my solvency. Here too the topic of Thanksgiving was, on cue, circulating around the bank like a generous drumstick with plenty of takers. A roast turkey in November. On a Thursday no less. Pazzi Americani, everybody agreed. I was just relieved to see I was still in the black. The turkey chatter clucking around would continue long after I left, no doubt. We all had a lot to be thankful for.

Back home, Michael and Lili joined us, giving a third nationality (the Brits) representation at the table. In the end, the only person who wasn't impressed by Thanksgiving was our 83-year-old neighbor Fiore. I invited him over to join us. No, no, no, he insisted. He had plans. Plans?, I gasped, spying his Fiat Panda half buried in snow. Yep, cards. The fellas were coming over for a game of Tre Sette. If the weather cancelled their evening, then, he said, he would consider stopping over to say hello. He then shut the door to keep the heat inside.

Fiore missed out. The meal was the best Thanksgiving feast in memory, and not just because we could not source Brussel sprouts nor any of its Belgian cousins. The turkey was sumptuous. As was the homemade stuffing and roasted veg (thanks to culinary maestre, Helen and Kate). The wine was in abundant supply. The fireplace was crackling. Snowflakes streamed past the window. The conversation, always lively, zipped across the planet at times including these imponderable moments: Judy Garland and her legacy from the Wizard of Oz to the Stonewall riots (courtesy of Jim), a few NY restaurant tips the next time I am in town (Helen), do all Americans really celebrate Thanksgiving? (Cristina) Something about how the good weather leaves the region whenever I come to Amandola and thus, the farmers want to know, if I could strategically arrive next year 2 weeks before the harvest (Michael).

Next door, Fiore and his pals played cards well into the night. As I turned out the lights around midnight I could see they were still going at it. We were in a tryptophan-induced fog. Turkey, I muttered.
Posted by Bernhard Warner at 12:41 PM