On the vino beat 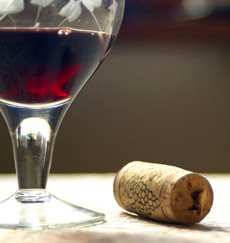 Yesterday evening I attended SensofWine, a showcase of Italy's vinicultura held here in Rome. Wines from around the boot were opened for sampling and every major variety was represented. I registered at the desk as a journalist and went around the showrooms tasting, asking questions, scribbling a few words on the back of the program, informing everybody I was a journalist, scribbling some more, and tasting a bit more.

In a completely unscientific and unobjective move, I stuck with Central Italy: the wines spanning from Abruzzo to Tuscany. I am intrigued by the idea of the latest wines from Basilicata, but not when there are DOCG Tuscans downstairs. I had the rare opportunity to conduct a little taste test, pitting a Brunello di Montalcino (Tuscany's best red) against a Sagrantino di Montefalco (Umbria's best). My humble opinion? The Sagrantino. Further afield, I sampled an overpriced and uninspiring Syrah-Merlot mix, S.to Ippolito from Vinci. (I bought a bottle of this wine for 20 euros a year ago around Xmas, and it was vinegar. Because I like the name, I thought I'd try it again. It was much better the second time around, but not worth 20 euros. Sorry, Leonardo.)

I then headed off for Le Marche to nose around. The Moncaro table was popular. They have a fabulous Rosso Conero Riserva. I had read recently that the Rosso Conero will be Le Marche's first DOCG red, maybe as soon as next year. When I asked the Moncaro rep, he just shrugged and waved his hands. "Non lo sappiamo", was all he could say. Guess not in '06. I then headed over, at the suggestion of one of the Marchigiani staffers, to AnticoTerrenOttavi, a vintner from San Severino Marche that I'd never heard of. They specialise in a grape called the Vernaccia Nera, which makes for a disinctly, deep, flavorful reds. I sampled the Pianetta di Cagnore. It was very good, and very different from any other wine from the region. In fact, it tasted a bit New World to me. But that's because the grape is bursting with flavor, not because the barrel was peppered with spices as they sometimes do in other hemispheres. This vintner also has a chilled vino dolce called Lisa di Cagnore. It was a bit too sweet and sassy (no doubt like her namesake) for my liking, but I could see it being popular with the ladies. The color is "cupreous pink", the brochure reads.

I ended my little giro dei vini with the odd little Marchigiani grape, il Pecorino. I met Simone Capecci, who runs Poderi Capecci, one of the vineyards that specializes in this fine white wine. He told me the the grape can be found in the valleys between the Adriatic and Ascoli Piceno and in sporadic zones south in Abruzzo. The origin of the grape, he says, is the hilltop village of Arquata del Tronto on the slopes of the Appennini. He tells me they have just begun exporting the pecorino to the United States, mainly the NYC area. He invited me to his vineyard in late November. I will have a full story then.
Posted by Bernhard Warner at 10:58 AM