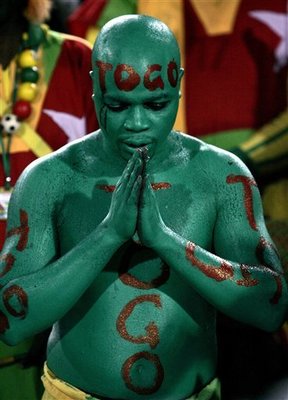 Yesterday I woke at 4:45 am and hailed a taxi to the airport. Two planes, a train, and four hours later I was in Franfurt, in the suffocating heat. (What is going on this summer in Europe? It's cool and breezy in Rome and sweltering up north. How do you explain that? Global warning, as Michael says.) Why Frankfurt? To meet a contact who had a ticket for me. A World Cup ticket. We were off to see that great football rivalry, South Korea v. Togo.

If you haven't been following the story of Togo in this year's World Cup, here's a brief summary. Ranked 96th in the world, Togo is a tiny African nation making its first trip to the World Cup. In fact, since becoming a nation in 1960, they've been too poor (today, the per capita GDP is $1700 and life expectancy for males is 55) or beset by wars and military junta style oppression to field a team most years. When, they did get 11 guys on a field, they usually came in last or second to last. But, low and behold, miracle of miracles. They qualified this year, earning the 32nd of 32 spots in a table that features the mighty French, Swiss and Koreans. Qualifying was where all the trouble started. The team has not been paid by the national soccer federation, and, in protest their coach Otto Pfister quit on the eve of their first match. Questions loomed: would Togo even play a match?

Pfister showed up yesterday, wearing baggy jeans and a half-buttoned black shirt, resembling more of a blackjack player on an all-night run than a football coach. He sat on the bench much of the game. When he did get up, he seemed peeved, as if kids playing in the street had disturbed him from an afternoon snooze.

His team, whomever they play, will be a big underdog. They are tall and athletic, but undisciplined, a poor match for the speedy, systematic Koreans. Even the Korean fans, all dressed the same, screeching in synch, seemed better prepared. (After having my ear drums shattered by the Korean fans' bat screeches all game, I have now placed the team top of the table for world's most annoying fans. How the human voice can hit that octave -- a cross between screeching bats and the yelp produced by pulling a puppy's tale with salad tongs-- I'll never understand.)

But there was Togo. The players seemed genuinely confident about their chances. They attacked from the first minute, and even caught the Koreans off guard. By the end of the first half, Togo's strategy of sending long bombs to run under and fire on net seemed to be working. It was like watching one team play soccer, the other basketball. Striker Mohamed Kader was nothing short of a one-man show. He streaked up and down the pitch, firing everything he had at the Korean goaltender. In the 31st minute, an improbable one got through. Togo: 1, Korea: nil.

The second half started poorly for Togo. The Koreans, regrouping at the half, decided to confuse the Togo players with more passes in the offensive zone, and, surely enough, Korea started peppering promising shots at the net. A few minutes later, a red card and free kick tied the score at 1. Now, down one player, Togo seemed doomed. And sure enough they let in another goal. Korea 2, Togo 1. But incredibly, the man disadvantage pumped some life into Togo. Kader was a one-man wrecking crew, barreling into a thicket of defenders, working for every scrap of pitch, and getting some solid chances on net. Exhausted and frustrated, they kept at it. Firing chance after chance at the Korean keeper. It was truly refreshing to see international footballers actually playing, not diving, flopping and play-acting about some phantom injury, hoping to induce a yellow card and favorable free kick. The Italian team drives me crazy for their melodramatics. Not Togo. Nobody taught them how to dive. Maybe this was Pfister's instructions. No cry babies. Togo went on to lose, 2-1.
But they won me over. They play the Swiss next, then the French. If they don't run out of spending money, if the coach decides to show up, and if they can manage to play at even-strength, Togo may surprise us all.

Go Togo!
Posted by Bernhard Warner at 8:51 AM