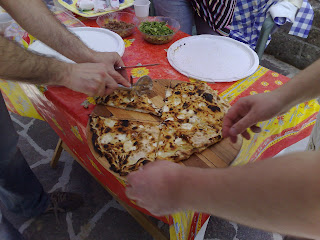 For three years now, a dark cloud has hung over a certain pizza oven in Central Italy. On an otherwise pleasant May afternoon in 2005, a champion was crowned for her pizza prowess, claiming for the second straight year the crown of "Best Pizza, regione Marche, provincia di Ascoli Piceno, EU-approved, Il Sette Bello-sanctioned" at the annual (well, not including 2006 and 2007) pizza festa in Sant'Ippolito (pop. 12 max; 400-plus pecore). The problem was the winner was known to be intimate -- nods, winks, nudges -- with the organizer. Worse still, that organizer is a not-to-be-trusted straniero, an americano, me.


That year's winner was Xtina who whipped up an, objectively speaking, revelatory pizza: a pine nut/raisins/salt/olive oil with garnish of fennel number. She toppled a strong international field. (Details are here). But once the ballots results were in, charges of favoritism, nepotism, pizza-ism were sounded, reaching even the capital here in Rome. Italians who missed the 2005 pizza gara ganged up on the winner and poisoned her coronation. People even questioned whether pine nuts + fruit belong on pizza. 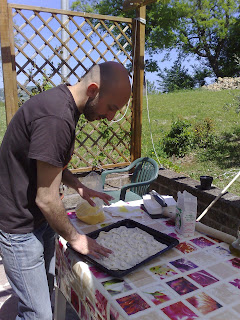 Would Xtina's good name ever be restored? Would the pine nut become the pineapple of pizza toppings? Would there ever be peace again in Sant'Ippolito?

Fast-forward to this weekend. A collection of promising rookies, vengeful veterans (and no, their pizza is not served cold), me and the reigning champ went at it in the hills of Sant'Ippolito in this the fourth crowning of best pizza. Three countries, five Ph.ds and nine pizza philosophies were represented. Regionally, we were a diverse group too. You had the liguri duo, Simone (pictured above) and Luca, who trash-talked the competition in an odd dialect throughout the afternoon and smuggled in their ingredients from former Genovese colonies. Then there was the charming romane, Giulia and Eugenia, who were whisking pizze in and out of the oven like the famous pizzaioli of l'obitorio. The most imposing force was the perugini 3: Xtina, younger sister Francesca and Fra's boyfriend Daniele. Rounding out the nine were the Peroni-swilling barbarians, me and Michael. Michael and I are the original pizzaioli of Sant'Ippolito, a community founded by wayward pilgrims in the dark, pre-pizza years of the Middle Ages. We'd like to think that in organising this annual pizza festa we are bringing a little more sunshine to this part of the world. That's what we tell ourselves anyhow.

With such a proud bunch, you might expect the recipes to come from wise aunts or grandmas. Not so. Only Luca and Simo stuck to regional fare of Liguria. Giulia and Eugenia snared ingredients from across the bel paese - speck and funky cheeses; Fra whipped up a pesto number, certainly not a Perugian speciality; Daniele went to the shores of Sardinia for a savory bottarga topping and Xtina headed north, almost to France, to source her topping. Me, I went local -- Mario's sausages. Michael went around and pilfered everybody's ingredients when they weren't looking.

And which pizza would emerge the victor from such a varied field? Which combo would be crowned pizza of the year, 2008? 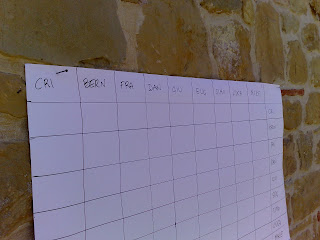 It wasn't Xtina's asparagus/fontina valdoastana. What can I say. The people demanded change this year. Instead, it was a pizza rossa, the first time in four tourneys that the winner was "red" (politically, this is a rare bit of inspiring news for the Left.)

Here's the rundown in reverse order:
No. 9: Me. Yes, I came in last, falling from 2nd overall in 2005 to dead last. It was a sausage/pecorino romano/raisin trifecta. I firmly believe in this trinity, however. It will be back. Xtina gave me a 2.5 out of 10. grumble, grumble
No. 8: Francesca. Pesto/pomodorini/mozzarella di buffala/basilico. It was a sloppy entry into the oven, but was quite tasty once extricated. It's Italy. Looking good is as important as tasting good.
No. 7: Simone. pomodoro piccante/ salame piccante. I liked this one a lot. The rest of the field thought it was too piccante. Cowards.
No. 6: Xtina. Asparagus/fontina valdoastina. In another pizza bake-off, on neutral ground, this could have won it all. The asparagus, matched by the sharp cheese, was a real standout. But another year of Xtina's pizza rule appear to have sunk her chances from the beginning. Democracy speaks. Again.
No. 5: Michael. This pizza was a brand new category in the world of pizza. The name? Fantasia. (There'll be a Disney trademark dispute, no doubt). It had speck, asparagus, pomodorini and various cheeses arranged, Dada-esque, on his doughy canvas. It looked better than it tasted. But it's the kind of pizza you'd be proud to hang on your wall. Bravo, vicino.
No. 4: Giulia. Speck, provola fumicata. A nice combo, and just narrowly missed out in the top 3.

And the bronze medal goes to Luca. He created a pizzata, a type of double-decker pizza. The bottom layer is focaccia with stracchino. The thin top layer is pomodoro/mozzarella.

Daniele. He blew away the field, outscoring everybody by 6 points with a bottarga/pomodorini/mozzarella masterpiece.

Tune in here to ISB. Later in the week I hope to have a short video up about the pizza festa.

Did moving the contest from harvest season to spring alter the judges' tastes? Perhaps all these results require an asterisk.

the most noticeable difference in moving it out of harvest season is a steep decline in the drunkenness of the participants. I attribute this to cultural differences. Anglo Saxons are more carefree and see pizza as something to celebrate. Italians usually come to these events armed and mistrustful