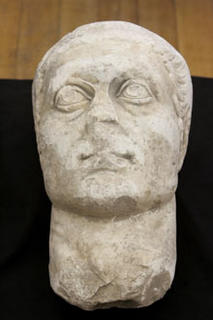 Here's an only-in-Rome headline: "Constantine dug out of a Sewer." Constantine, as we know, is the emperor credited with founding Istanbul (not Constantinople) and making Christianity the official religion of the empire in 325. And what did he get for his noble deeds? Rampaging hordes threw his massive (60 cm) marble head down a sewer. And, 1600-some-odd years later, They Might be Giants penned a song reminding us that his eponymous town has had a name change... Why did Constantinople get the works? That's nobody's business but the Turks.
Posted by Bernhard Warner at 6:19 PM