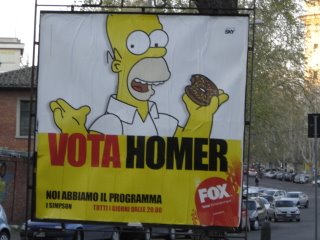 It's election day here in Italia, a rare day of promise and possibility. Xtina has been hitting the phones trying to convince her right-leaning friends that a day at the beach would be much better for their country (and complexion) than queuing up to vote for Berlusconi. She rationalises this as "democracy in action." In the category of dirty Election Day tricks, it's fairly benign. In a country that has been living under red state-blue state style political divisions since Mussolini's day, it's seen as everyone's duty to sway the vote one way or the other.

The lefties have been eagerly awaiting this day for 5 years: the chance to oust Berlusconi's Casa della Liberta' (or "Freedom House" which, to me, has a creepy, Fr. Bruce Ritter ring to it) and start over. In Roma, a lefty stronghold, we run into very few supporters of the right. But they're there. A surprisingly strong enclave of Berlusconi supporters, from this vantage point, are the little old nonnas who go to church daily. We spoke to a priest the other night. He insists there will be no politically-inspired surmons this Sunday -- just palms. It's a relief to most Italians that the Catholic Church is keeping quiet. They had objections to Prodi's plan to help young families a few weeks back, but it was a brief conflagration. It looks like this one will be in the hands of the people -- no wonder democracy is such an unsettling concept for some.

As for me, I have no vote. I am an impartial observer, a commentator. What does this mean? I am quick with a list of grievances and broken promises for our friends on the right. And I point out that the left in Prodi and his motley coalition seem ill-prepared to tackle meaningful change. The best thing about democracy is we only have ourselves to blame if the man in charge screws things up. I can live with that.

Votate, Italiani.
Posted by Bernhard Warner at 10:28 AM