About two hours ago, we received word that Chris and his climbing team of Don Bowie and Bruce Normand had reached advance base camp (it's not marked on the image below; but ABC is about 2-hour trek from base camp). Their descent continues in the morning, local time; they should reach Base Camp tomorrow some time. On Friday, the American trio summited 8,611-meter K2. On behalf of friends, family and countless well-wishers, Congratulations! We're elated and incredibly proud of you in accomplishing such a rare feat. We wish you a safe and speedy return. Good luck, guys! 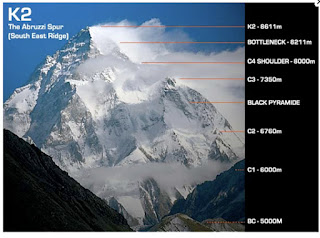 According to The Baltimore Sun, my brother Chris is only the ninth American to have summited both K2 and Everest. Before Friday's successful ascent, just 253 climbers had reached the summit of K2 between 1954 and 2006.

Friday's historic day comes with some bad news. Evidentally, and this is unconfirmed as of now, an Italian climber from Terni, Stefano Zavka, and two members of the Korean team remain unaccounted for as of a few hours ago. It's a tense situation as there's been no word from Zavka and the Koreans since Friday, and bad weather is beginning to lash the mountain. (It should be noted that the bad weather could be fouling with the communications lines too, explaining the lack an update on their whereabouts). Our hopes and prayers go out to Zavka and all the climbers, plus their friends and family, in these tense hours.
Posted by Bernhard Warner at 3:09 PM