New York City, London, Washington D.C. and Ponte Felcino, un paesino on the outskirts of Perugia? Yep, little ol' Perugia, Xtina's home town, is the latest front on the war on terror. Police are saying a little mosque in Ponte Felcino (population: nessuno) was a front for training Al-Qaeda foot soldiers. Police found poison, explosives and instructions on flying a Boeing 747 at the mosque. 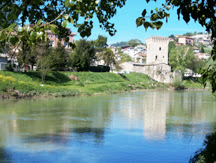 The news has been trickling in to quiet, leafy Ponte Felcino (pictured) throughout the weekend here. (We drove up Friday from Rome to beat the heat, only to find it hotter here in Perugia - literally and metaphorically.) The Perugini are genuinely stunned that their pristine city is on the terror watch list, but they don't seem to be too fussed about the discovery of Al Qaeda under their noses. If it were a cell of Albanians, that would be different! Kidding, of course.

Our friends have a business in Ponte Felcino, which is where we heard the news yesterday evening when we met them for dinner. They say the Muslim community is visible and growing in the region, but quiet too. If there was a terrorist training facility here, they concluded, there could be one in any community. Ponte Felcino is a community where everybody knows everybody else's business. To outsiders like me, it always seems as if every straniero -- and that means anybody born outside Perugia -- is under suspicion. I wouldn't be surprised if police were tipped off by a church-going nonna whose been surveilling the group for ages.

The timing of the arrest is interesting, I can't help but point out. The annual Umbria Jazz fest concluded last weekend, easily the region's most popular tourist attraction. Most of the music fans have left the city and life around here is slowly returning to its slow summertime rhythm. After the jazz fest and before the start of the school year (L'universita per gli stranieri), which attracts hundreds of foreign students from all over the world to study Italian and sample fine prosciutto perugino, the city is rather quiet, the perfect time to swoop in and break up a terror cell.

It's not been the most pleasant of summers for i Perugini. They are still chewing over last week's scandal: the lifetime ban the festival organizers imposed on pianist Keith Jarrett. In an angry outburst, Jarrett refused to play until fans turned off their "F---ing cameras". Otherwise, he would "leave this goddamn city". Such a slur has earned Jarrett the Public Enemy Number 1 tag. The three Al-Qaeda guys trail somewhere behind.
Posted by Bernhard Warner at 10:01 AM