If your favorite band had a tube stop, it would be? 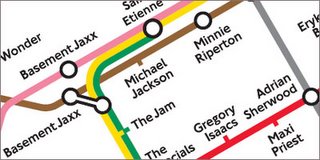 It now costs, I learned this week, £3 for a one-way, zone 1 trip on the London Underground. But that's not my biggest tube-related gripe today. It's this Guardian article by Dorian Lynskey in which he heroically tries to reconstruct a taxonomy of popular music over the past 100 years and chart it, family-tree-style, on the classic London tube map layout.

The Central Line, for example, is Reggae and thus Lynskey places Peter Tosh on the map where White City should be. The Clash is the end of the both the central (Reggae) and district (Rock) lines, or Ealing Broadway. (I doubt the band had Ealing Broadway in mind when they penned "Train in Vain").

There are numerous clever placements such as the Rolling Stones at Earls Court, the terminus of rock (district) and blues/country (piccadilly). Ditto for Beck at King's Cross, the intersection of funk (victoria line), hip-hop (northern), pop (circle), electronica & dance (hammersmith and city), jazz (metropolitan) and blues/country (piccadilly). And Public Enemy at Camden Town on the hip-hop, erm, Northern line.

But there are some big omissions too. For example, where's Jethro Tull, a fairly influential rock band in its day that had two songs named after Tube stops: Piccadilly Circus and Leicester Square? Ok, at 16 I may have been aggrieved with the Jethro Tull oversight. But if The Flying Burrito Brothers or the Creation can make the map, then why not Tull?

I'm willing to let that one slide. But these three really should have made the cut:

-- T. Rexx. Even if frontman Marc Bolan hadn't died in a car crash not far from Wimbledon (on the district/Rock line), T.Rexx's 70s chart performance is enough to land them on the map -- maybe swapped in for The Crazy World of Arthur Brown (Wimbledon).

-- Dire Straits/Mark Knopfler. For the same reason Jethro Tull deserved consideration, why not Knopfler? He has my all-time favorite tube-inspired lyrics in Junkie Doll. "Turnpike Lane, Turnpike Lane/ You spiked my arm / But you missed the vein... Turnham Green, Turnham Green/You took me high/As I've ever been" In fact, Turnham Green (a stop on both the Piccadilly & District lines) is a no-brainer for Knopfler. What's there instead? The Byrds.

-- Neither AC/DC nor Eric Clapton get a mention. Further aggravating the problem, Cream is placed at the Fulham Broadway stop. I once dated a girl who lived around the corner from Fulham Broadway. One reason I broke things off with her? I hated taking the District Line.

-- But the biggest goof? Parliament/Funkadelic is at Green Park. What's the next stop down the line? Westminster! (pop/rock/avante-garde)
Posted by Bernhard Warner at 3:05 PM

Right here, my friend: the subject of Yacht Rock 6.

If this episode confuses you, you might want to watch the earlier ones.

...so that's how the tillage revolution began? Thanks for the tip, Andy